One of the university’s tasks is to make its knowledge, body of thought and results of research available and comprehensible to a broad public. Especially the geosciences have a current duty to do this, as knowledge of geo-scientific interrelationships, global cycles and an understanding of the presence as a moment in a dynamic development of the geo-biosphere are decisive preconditions which must define our efforts to conserve our habitat earth and its resources. 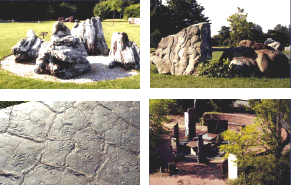 This is considered far to little by politicians in their decisions, but also by all of us in our daily life.
The idea of the “Geopark Göttingen” is to present and make comprehensible to a broad public the dynamics and the development of the earth’s crust, the global cycles with which we humans interact and the history of our planet and life.
Rocks are the documents which convey this history, therefore big spectacular rocks and rock formations are the preferred exhibits of the Geopark. These are supplemented by artificial and artistic models and plants from earth’s history. Today’s earth crust and life are the result of a long development. Rocks and rock formations unlock the temporal and spatial dimensions and allow the present to be understood as a result of the development of earth and life in the flow of time. The unusual rocks and rock structures to be found in the Geopark Göttingen illustrate geo-scientific processes and relationships.

The "Geopark Göttingen“ is meant to form a unit in a larger scientific park (J.F. Blumenbach facility) together with the New Botanical Garden and the Garden of Forest Botany at the periphery of the new natural science institutes of Göttingen University.

The construction of the Geopark began in 1991. Since then about 20 thematic groups have been realised or started.


Guides for independent visits to the Geopark can be obtained at the entrance of the Institut. The varius stations within the Geopark are not systematically arranged. One can therefore decide on one’s own route or according to thematic interest.

Brunnentor: A fountain is designed as a high gate, which mirrors the basic principle of water as an episodic force in and on the earth. The outpouring and seepage of water in the “Brunnentor” symbolises the collection of mass up to a critical point or respectively the accumulation of forces up to a breaking point. Such events are often catastrophic on a big scale, such as volcanic eruption, earthquakes or avalanches.
Furthermore geoscientific connections are explained in word and picture. Emphasis is given to plate tectonics and the position of continents as well as the prediction of the development of our turbulent planet into the distant geological future.

The stumps of mammoth trees (Mequoioxylon) of the Tertiary period (Eocene / Oligocene, about 35m. years ago) originate from Saxony’s brown coal deposits. They developed from the wood of dead trees. The subsequent filling of the cellular cavities with sillicid acid can be seen in detail on these stumps.

The so called Arthus-Runde (Arthur’s Round) in the Geopark is an oversized seating arrangement made from polished stoneplates of the deep earth’s crust. These rocks, their minerals and structure are expressions of the high pressures and temperatures in the earth’s crust.

Expansion Plans fort he near future are 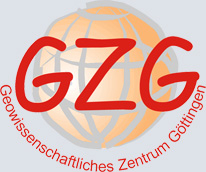