I have studied biology at the Humboldt-University of Berlin with a main focus on zoology, animal physiology and palaeobiology. After I have been to Namibia for six weeks working on my student research project with the aim to prepare a comparative biodiversity study with regard to the carrying capacity of a desert ecosystem and different management practices, I did my diploma thesis about the population dynamics of Corvus frugilegus (rook) in Berlin, considering previous field studies from 1999 to 2007 and own field work from 2008 and 2009.

Since 2010 I am working as PhD-student in the ecology of animals working group on aboveground-belowground interactions in forest ecosystems.
Starting 2010 I identified soil fauna organisms from a field site closed to Halle. On a former arable land six different tree species Fagus sylvatica (Buche)., Fraxinus excelsior (Esche), Tilia cordata (Linde), Quercus petraea.(Eiche), Pinus sylvestris L. (Kiefer) and Picea abies (Fichte) were planted in different combinations. The aim of this study was to check for the effects of tree and litter diversity on ecosystem processes and functioning. In cooperation with different working groups we wanted to quantify the effects of tree and litter diversity on the structure and stability of soil food webs as well as the effects of tree and litter diversity on aboveground tree parasites and pathogens.
In autumn 2010 the “Species Litter Identity and Diversity effects on the RHizosphere of trees – Experiment” was established as cooperation project of six different biological working groups of the Georg-August-University Göttingen in the vicinity of Reinhausen. In this field study in which litter and tree diversity are manipulated independently, I investigate the effects of above- and belowground resources (leaf litter and root/root exudates) on microarthopod abundances and community composition. Furthermore Phospho-Lipid-Fatty-Acid-analysis (PLFAs) are done to disentangle the microbial community.
The response of tree growth, decomposition processes, 15N incorporation and soil animal performance to manipulations in soil animal species diversity (1,2,3,4), soil animal ecological group diversity (1,2) and ecological group identity (anecic/hemiedaphic, endogeic/euedaphic) as well as taxonomical group identity (earthworms, collembolan) and to interactions between soil fauna organisms were studied in a laboratory experiment using experimental pots.
Furthermore I participate in a rhizotron-experiment in which beech and ash saplings were planted in split-root cosms and grew with labled ash or labled beech litter. Two earthworm species differing in their ecological group affiliation were introduced into some of the cosms. The aim of this study is to identify the effects of earthworms on decomposition and C/N flow through the soil system in dependency of litter quality.
Methoden:
Identification and determination of soil animals
Phospho-Lipid-Fatty-Acid analysis (PLFA)
Stable isotope analysis (15N)
Substrate induced respiration analysis (SIR) 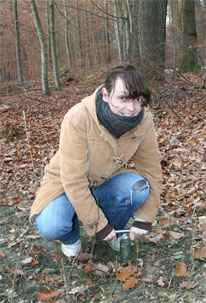