Prey preferences of the Persian leopard and degree of trophic competition with human hunters in Iran (DAAD, Panthera Foundation, 2012-2016)

The Persian leopard is the last surviving large cat of the southwest Asia, after extinction of the Asiatic lion and the Caspian tiger in the past century. Although leopards are generalist carnivores and can tolerate different habitat conditions and prey sizes, the Persian leopard has gone extinct or its population has been severely reduced within much of the former range. One of the main threats to leopards in Iran is reduction in natural prey numbers. Poaching ungulates occurs frequently in most of the leopard's range, however the scale and dynamics of these incidents are unknown and its effects on leopard abundance and distribution has not been studied to date. During this research in Golestan National Park, Iran, we will focus on the question whether lack of natural prey due to extensive poaching of ungulates by the local communities creates a trophic human-leopard competition.

Our goal is to quantify potential competition between leopards and poachers, to identify whether this competition can cause a threat to survival of leopards and act as a driver of human-leopard conflicts.

To address this main goal, several objectives need to be accomplished: 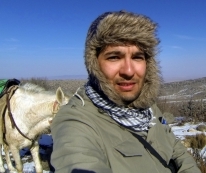