Dr. Barbara Titus studied musicology at Utrecht University and gained her doctorate from Oxford University in the United Kingdom with a dissertation entitled ‘Conceptualizing music: Friedrich Theodor Vischer and Hegelian currents in German music criticism, 1848-1871.’ (Leuven University Press [forthcoming]).
In 2007, she shifted her attention from German metaphysics to South African street music (maskanda), with the explicit aim to question the polarity that these two fields of investigation still seem to represent. Articles about subjects ranging from 19th-century German music criticism to contemporary popular musics in Southern Africa have been published in journals such as Acta Musicologica, Ethnomusicology, SAMUS: South African Music Studies and the Dutch Journal of Music Theory. Her book about maskanda is currently under review with the University of Chicago Press.
From 2008 to 2013, Barbara worked as an assistant professor teaching European music history post-1800 at Utrecht University. In 2013, she was appointed associate professor of cultural musicology at the University of Amsterdam. During two extensive field trips for her research into maskanda in 2008 and 2009, she was a visiting professor at the University of KwaZulu-Natal in Durban, South Africa. 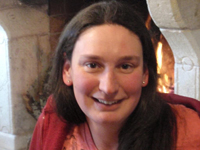