Big cats include seven well-known species, which are the flagships, keystones and umbrellas for ecological functioning and conservation of biodiversity and landscapes. One of them is the leopard (Panthera pardus), which is the world's most widespread but also most persecuted big cat, now categorized globally as Near Threatened. The leopard of Southwest Asia is ranked as Critically Endangered to Endangered, with the stronghold range country of Iran and the largest population living in Golestan National Park (GNP).

Near this protected area, leopards frequently attack calves, sheep, goats and dogs and thus provoke confrontation with local people, which often ends up with retaliatory killing of leopards. Out of 34 villages around GNP, 18 (52.9%) have such conflicts. In 2013, we initiated a project on fixing collars on local livestock in order to protect them from leopard attacks, having borrowed this idea from South African farmers.

We produced 398 collars and fixed 190 on calves in 9 villages, 73 on sheep and goats in one village and seven on dogs in one village. We emphasized calves because of their economic value, which fetches significant losses in case of predation. In calves, these collars caused discomfort during grazing, reduced body weight, complicated grooming behavior and led to attacks by non-collared conspecifics. For this reason, we decided to remove all collars from calves and to expand collaring of sheep and goats.

For sheep and goats, we produced 475 collars and fixed them in seven villages. They cause no problems for animals and are liked by owners. Some nape itching is possible during the shearing season, so owners remove collars and fix them back when wool re-grows.

In the coming years, we plan to maintain sheep and goat collaring, establish collar manufacturing capacities in local villages and apply new re-designed collars to calves. 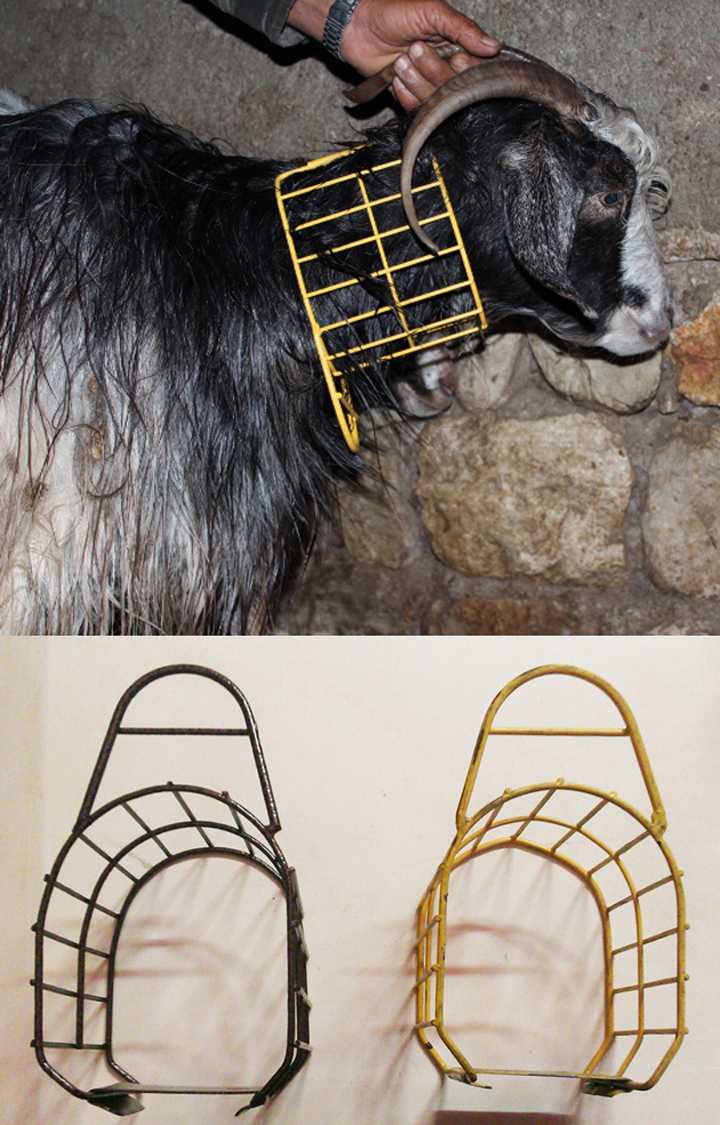 The original collar from South Africa (right) and its replica from Iran (left) which work fine on sheep and goats in these countries. The top picture is from a village near GNP. Photo: M. Soofi (top) and A. Jafari (bottom).