In forest ecosystems, most of the organic matter supplied to the organic (O) horizon is mineralizes to CO2. However, portion of organic matter is leached as dissolved organic carbon (DOC) as soil water percolates. The DOC transported to the mineral soil horizons may be mineralized, leached or adsorbed onto mineral surfaces. The objective of this research is to characterize the DOC in Bukit Duabelas National Park and reveal the effect of soil properties, soil depth and the landscape position on DOC fluxes.
Six sites with different landscape positions-namely two soil profiles at the top, two soil profiles at the middle of the slope, and two soil profiles at the foot of the slope (near a creek)-were selected in Bukit Duabelas National Park. Soil samples were collected in the A, AB and Bt horizons. The selected soil properties-namely SOC, total N, cation exchange capacity (CEC), soil texture, dithionite-citrate-bicarbonate-extractable iron (Fe) and aluminum (Fed and Ald), oxalate-extractable Fe and Al (Feo and Alo), organically-bound Fe and Al (Fep and Alp)-were analyzed. The soil solutions were collected beneath the A, AB and Bt horizons once per month during one year and DOC conentrations was determined.
The results showed that the concentration and amount of DOC in soil profile on the lower slope were higher than those of soil profile on the upper and the middle slopes (Fig. 1). The concentration and amount of DOC under AO horizon were higher than those of AB and Bt horizon. The result of Pearson correlation showed positive correlations between DOC fluxes with organic-C, total-N, and Cation Exchange Capacity (CEC), but negative correlations with pH, and Fe dithionite-citrate-bicarbonate (Fed) content. The results suggested that the increase of SOC, total N and CEC increased DOC and the increase of pH and Fed decreased DOC. 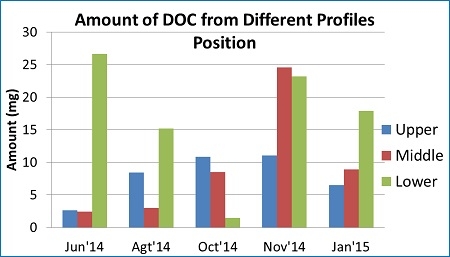 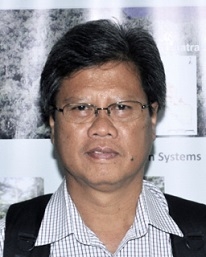 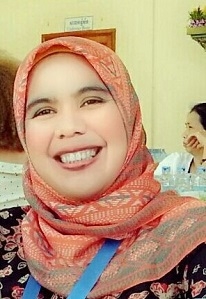