Early Muslim historiography represents not only a central part of Islamic Studies, but is also utilised by Muslims in Germany and in the Middle East in determining and forming identity.

Since the earliest period of Islam in the 7th century, Muhammad and the early believers endeavored to provide their community with an image of their past. After several decades had elapsed, these historical constructions were contextualized with concepts of other religious and tribal groups, coupled with alternative images of the past. As a result of this development, various reconstructions of the early Islamic past have been suggested, which have given rise to controversial debates that have continued up until the present day. For example, some scholars have argued, on the basis of extant historiographical sources, that Muhammad did not exist; whereas others stick to the prevalent account of Muhammad having been a prophet and the founder of the Islamic religion. Both views are based on the substantial, yet sometimes ambiguous, sour- ce material, which demands continuously and indepth study.

Hence, this international and interdisciplinary workshop is devoted to four central questions pertaining to early Muslim historiography: First, the question of the compilatory character of the textual sources; second, the narrative strategies and techniques of composition used in historiographical works; third, the question of fictionalization in historical narratives; and fourth, the intercultural and interreligious context of early Muslim historiography.

The central goal of this workshop is to provide a forum that will foster an exchange of ideas and fruitful discussions on new approaches to Muslim historiography. It also seeks to present the latest research findings in the field and to develop new research perspectives for the future. 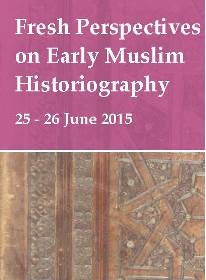