The visual systems of mammals and birds are highly evolved and specialized. Highly structured visual cortices, consisting of distinct layers with functional and anatomical ‘columns’, underlie mammalian vision. Instead, the avian visual system is organized in multiple clusters that resemble at the first glance the histological pattern known from the basal ganglia. Distinct layers or ‘columns’ are not immediately visible in birds. However, recent genetic data support the connectivity-based idea of a homology between distinct cortical layers and individual clusters of the avian sensory systems. Neuroanatomical data furthers this evolutionary similarity by demonstrating horizontal and vertical connectivity in the avian sensory systems that is akin to the canonical circuit of the mammalian cortex. Since it is unlikely that laminated and columnar organizations result from common ancestry, it is more likely that both vertebrate classes developed this pattern independently (convergent evolution) or sophisticated it in similar ways (parallel evolution) during 300 million years of separate evolution. We aim to investigate how these two principles of organization relate to each other and if they developed overlapping functional dynamics. Read more

Working memory, the ability to briefly retain and manipulate information in mind over seconds to minutes, is the fundamental basis of cognition in humans and intelligent animals alike. This project uses a comparative approach in order to decipher the neuronal codes and overarching computational principles of working memory in convergently evolved associative endbrain structures of humans, monkeys and crows. Read more

Neuronal circuits evolved ultimately to control behavior. Their intricate connections reflect an evolutionary process that selects for efficient behaviors. Yet, the way in which these circuits implement them is mostly unclear, because it requires one to relate neuronal representations to animal behavior. This daunting task is made considerably easier by studying insects compared to vertebrates, due to their compact and stereotyped neural circuits that govern innate behaviors. Moreover, insects allow for powerful comparative studies; closely-related species may have altered their behavioral strategies by manipulating a conserved set of underlying circuit motifs. Here we aim to take advantage of functional and comparative genomics, proteomics, as well as a system neuroscience perspective, to uncover the underlying genetic mechanisms and functional specialization of circuit adaptations across Diptera. Read more

Although the principle wiring pattern within the glomeruli of crustaceans and insects share many similarities, there also exist pronounced difference of these olfactory core circuits. Therefore, this system can be seen as an ideal playground for those interested in analysing evolutionary diversification of neuronal core circuits. By comparing insects and crustaceans we can analyse the end point of past evolutionary optimization processes by analyzing which potential alternative solutions arthropods have found for olfactory circuits. Read more

“Higher animals” typically evolve in complex environments that provide ecological niches for species with a wide variety of cognitive abilities and different behaviors. The enormous complexity and variability of this environment suggests a corresponding large variety of computational demands in neural processing. Therefore optimizing dedicated individual neuronal pathways and circuits for each individual task must quickly have come to a limit set by the amount of brain tissue which can reasonably be supported by a given species. One evolutionary principle and way out of this dilemma may have been the development of increasing amounts of flexibility in using the same set of neurons and neuronal circuits. Conceptually, this perspective implies co-evolution of function and flexibility: Evolutionary principles not only optimize neural processing towards specific functions, but also shape networks to be able to efficiently and rapidly change between different functional configurations for different behavioral needs. Here we will explore the hypothesis that neural systems optimize their ability of being flexible, and that corresponding networks are constantly adapted on all time scales to maximize flexibility while robustly performing varying tasks. This problem is non-trivial since optimizing for a particular computation and for flexibly switching between different computations naturally compete. Read more

Temperature critically affects the physiological processes of an organism. A failure to assess its absolute value and rate of change can have a spectrum of consequences, from tissue damage to failure of the entire system. Therefore, animals have evolved different strategies to maintain their body temperature in a narrow optimal range. Regardless of the specific strategy, the brain plays a crucial role in detecting temperature changes, evaluating them in the current context and state of the animal, and directing both physiological and behavioral changes. We are interested in where relative changes, as opposed to absolute values in temperature, are computed and then combined with current state and past experience, in order for the nervous system to implement changes in behavior and maintain its temperature optimum. Read more

Most mammalian species including mice have dichromatic cone vision. Trichromatic color vision has presumably emerged in evolution by first integrating an additional opsin with deviating spectral sensitivity into the retina. Then the downstream networks were adjusted to process new and hitherto unseen inputs. But which exact steps were actually necessary to integrate a whole new information channel into the existing circuits of visual information processing? An answer to this question is of immediate concern for understanding functional adaptations of the nervous system during evolution. Here, we will study this question by characterizing transgenic mice with trichromatic vision, and analyze the physiology of color vision in animals, side-by-side with a neuronal network model of primary visual cortex exposed to suitable chromatic input from an artificial retina. Read more

Active sensation is the mode of operation for most behaving organisms. While there are a multitude of computational advantages to active sensation, moving the sensor, such as the eyes for the visual modality, invariably introduces complexities in processing of the input sensory streams. This is so because, during active sensation, information may be sensed by the organism that is the consequence of the sensor movement itself, as opposed to being a result of a genuine novel event in the outside world. Here, we focus on vision and eye movements. We study a robust perceptual phenomenon, called “saccadic suppression”, in which perceptual detection thresholds for brief visual stimulus presentations are dramatically elevated when the brief visual stimuli appear near the time of rapid saccadic eye movements. Our goal in the proposed research is to approach saccadic suppression from the perspective of evolutionary convergence and optimization. Read more 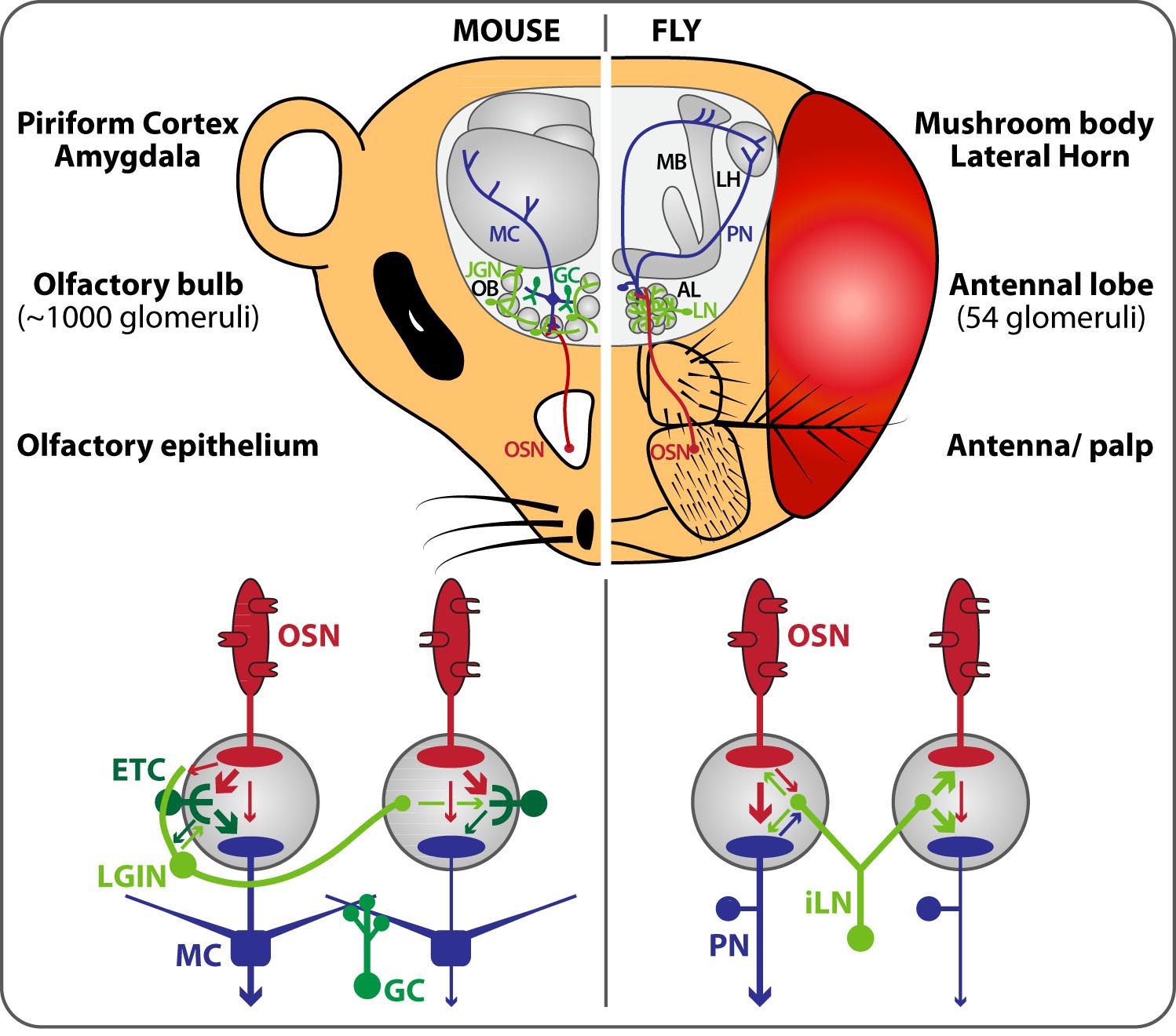 Inhibitory neurons are present and active all over the nervous system and play an essential role in stabilizing and tuning responses of excitatory neural subnetworks. In the olfactory system, complex inhibitory circuits modulate the impact of sensory neuron input and mediate interactions between second order principal neurons. These pathways are assumed to regulate olfactory sensitivity depending on behavioural state, control the gain exerted by principal neurons, synchronize neural subnetworks along fast and slow rhythms of activity, and enhance the spatial contrast of odor coding via decorrelation of similar odor-evoked response patterns. The architecture of the underlying network anatomy is astonishingly similar across insects and vertebrates - a prime example of convergent evolution. Here we aim to clarify the cellular basis of defined inhibitory interactions across phylae, based on predictions inspired by findings in the respective tandem lab. Read more 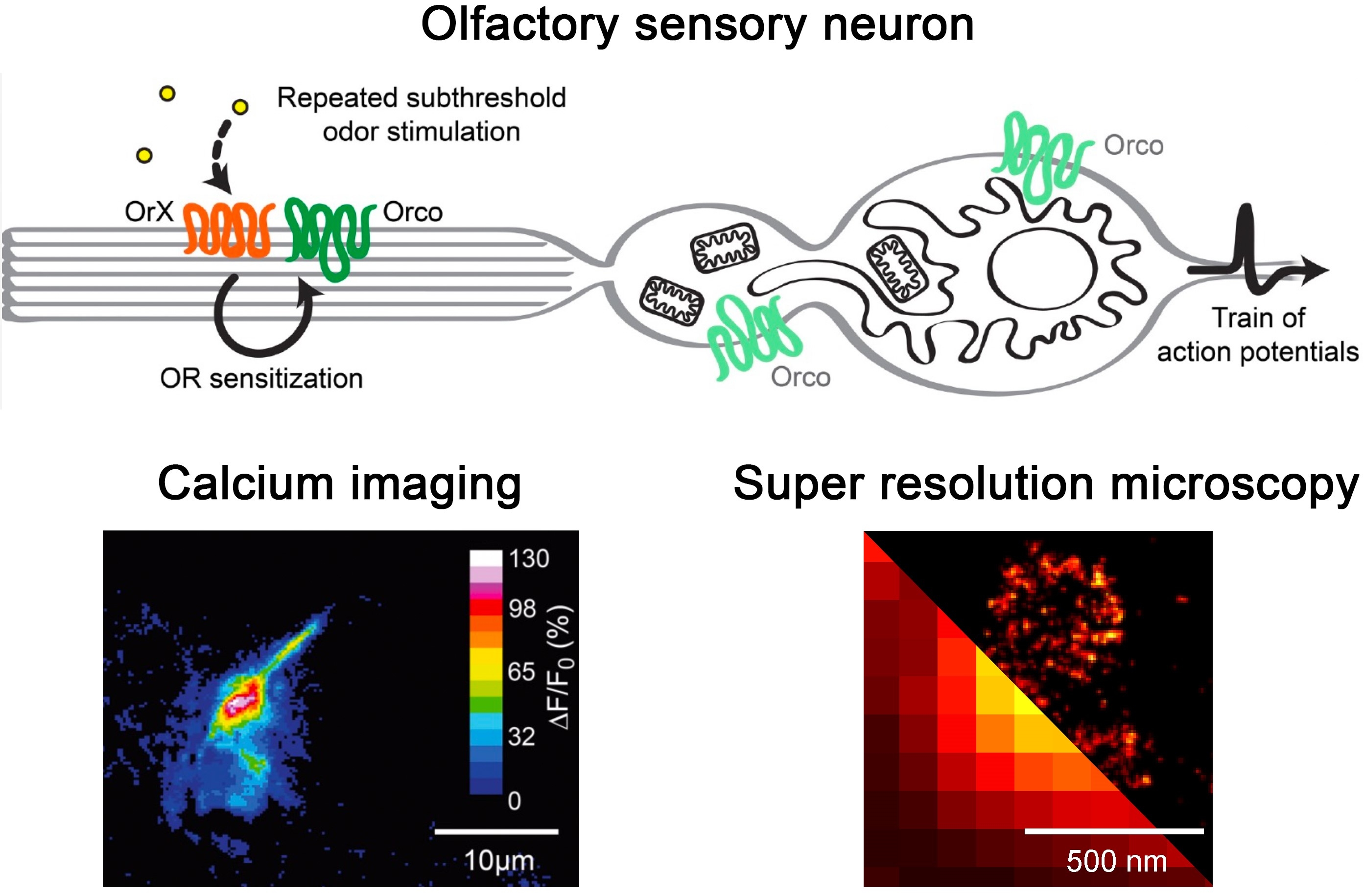 Sensory systems have to provide an appropriate representation of the environment. What is appropriate depends on the meaning of a signal for the organism. The current project focusses on the tuning of insect odorant receptors. Olfactory sensory neurons expressing the receptor Or56a which detects the alarm odor geosmin, a product of toxin producing microbes, are permanently tuned to highest sensitivity. By contrast, cells expressing the food odor-detecting Or22a are set to moderate sensitivity under resting conditions but can be sensitized on demand. The aim of this project is to investigate how these different properties in sensory neuron performance are realized and manifested at various levels, such as odorant receptor expression density, downstream signal processing and amplification within the compartments of the receptor neuron. The comparative approach will target the olfactory signaling chain of Or22a and Or56a expressing olfactory sensory neurons at the various levels. To this end, we will apply calcium imaging, super resolution fluorescence microscopy, and the electrophysiological patch clamp technique. Read more

The diversity of animal behaviors – even among closely related species – is testament to the high evolutionary plasticity of the neural circuits driving them. How neural circuits evolve to produce diverse behavioral phenotypes is largely unknown. This is because the nonlinear mapping from circuit parameters to computation and behavior crucially shapes behavioral evolution yet remains unidentified. Acoustic communication systems exhibit highly diverse signal and recognition phenotypes and can diverge rapidly, suggesting highly evolvable and shared core circuits. Comparing recognition phenotypes, computational principles and circuit mechanisms in a phylogenetic context is therefore ideally suited to identify the evolutionary principles of circuit design. We propose to implement this approach in crickets. Read more

Insects are the most diverse group within the animal kingdom and provide both important ecological and economic benefit. For successful hunting, foraging, or dispersal, most free-living insects rely on considerable navigation skills, for which they use different visual stimuli, like celestial bodies and skylight polarization. Despite great morphological diversity of insect eyes, recent data revealed that their retinal mosaics show remarkable similarities across species. While systematic morphological characterization has identified retinal detectors for polarized skylight in virtually all insects analyzed, it remains unknown whether specification of these structures and their underlying neural circuitry are in fact evolutionarily conserved. Our project will reveal evolutionarily conserved mechanisms as well as species-specific adaptations behind the formation of neural circuits for insect skylight navigation. Read more

The mouse lemur dedicates 20% of its total cortical surface to a single area, V1. This represents a several fold increase compared to rodents of similar brain size. This massive “investment” of neuronal resources into a putatively primitive primate-type V1 is likely representative for small-sized basal primates. It suggests that the architectural transition from rodent-like to primate-typical V1 architecture is associated with a substantial adaptive value. Mouse lemur V1 exhibits some but not all of the hallmarks of anthropoid primate V1 architecture. These observations raise fundamental questions about the evolution of V1 neuronal circuitry near the origin of primates. In this tandem project the Wolf and the Huber lab will jointly address these questions in theoretical and experimental studies of visual cortex and visually guided behavior of the mouse lemur. Read more

The cocktail party problem emphasizes the amazing capabilities of the auditory system to separate one source of acoustic information from many other jamming signals. Particularly challenging for neural systems is the detection of faint signals close to threshold on a background of much stronger distractors. We propose to study the latter scenario both theoretically in populations of integrate-and-fire neurons and electrophysiologically as well as behaviorally in the active electrosensory system in two species of weakly electric fish. Our work will provide solid and fundamental insights as to how weakly nonlinear interactions are involved in encoding faint signals in the presence of strong jamming stimuli. We will understand how evolutionary adaptations of a convergent network of neurons provide the basis for solving this difficult cocktail party problem. Read more