I am a botanist interested in the evolution of plants through time. My focus has been on the seed plants, particularly the gymnosperms. My postdoc here continues examining fossil plants in detail, but I have also been able to include a fascinating new dimension to this work: amber. My interests have broadened since my PhD to cover four distinct, but interconnected areas:

1. The evolutionary history of seed-plants
I started by looking at the modern extant flora, which comprises five extant, but highly disparate lineages: cycads, conifers, Gnetales, Ginkgo (all gymnosperms), and the flowering plants (angiosperms). The origin of these lineages from the stem-group gymnosperms is still unresolved and is dependent on the discovery and interpretation of fossil taxa as well as improved molecular sampling. The integration of modern molecular results and fossils, for me, is key to understanding the past and thus the present plant relationships. I also enjoy the challenge of trying to rebuild fossil plants since they are often found as separate pieces, and figuring out how they may have really functioned 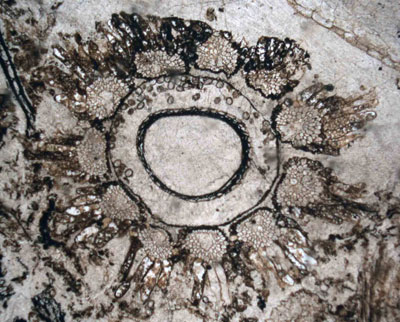 A median transverse section of the ovule of Physostoma elegans Will. showing the lobate portion of outer integument which is densely covered in hairs. This thin section was obtained from a Lower Carboniferous coal ball from Lancashire, UK.

2. The co-evolution of plants with other organisms through Phanerozoic time and including modern ecosystems.
By looking at the often subtle and complex interactions of all the organisms within an ecospace, the plants, animals, fungi and bacteria, a clearer picture of palaeoecosystems emerges, as do the potential timings of innovations 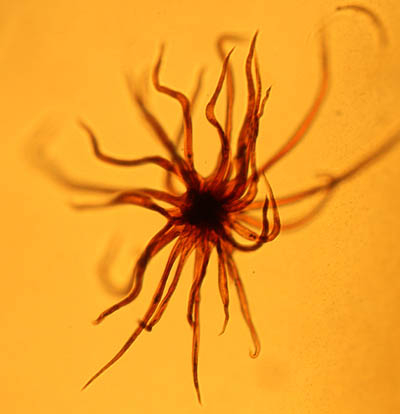 Stellate plant hair from a fern preserved in Cenomanian amber from Ethiopia. The resin itself is not from a fern, so the fossilized exudate of one plant species has entrapped an indication of a different species co-occurring in an amber forest..


3. The effect of biological innovations on both the biological and geochemical environment and habitat development.
A particular example of this is from an unexpected area of resin research. Plant resins can be used as a substrate by some organisms. These organisms have a precarious existence, their very food source can threat to engulf and entomb them. Should this happen and be preserved, we would see a biological inclusion in amber.

The anamorphic ascomycete genus Monotosporella from a lichen thallus inside Eocene amber (left) and from modern Agathis resin in New Caledonia (right). .

4. Plant resins and their relationship to amber in the fossil record.
Amber as a fossilized plant resin contains chemical information on the parent plant that produced it and potentially information on the ecological conditions that led to its production, and the geological conditions of its fossilization. Normally amber is found rarely throughout the fossil record; however, there are key points in earth history where ‘amber bursts’ are seen. These amber bursts are characterized by great numbers of large amber accumulations worldwide. Amber bursts occur in the Late Triassic, the Early to mid-Cretaceous, and the Eocene to Miocene, all three epochs are crucial periods in seed plant evolution, and so my interest in amber neatly feeds back to my interest in seed plants. By studying the modern resin-producing trees I hope to get a clearer understanding of the conditions for resin exudation, particularly in conifers, since other gymnosperms do not today produce resins but instead they produce other secretions. Understanding the causes of massive resin outpourings, as opposed to more ‘normal’ resin production would help to explain the ecological/biological reasons for amber burst phenomena. 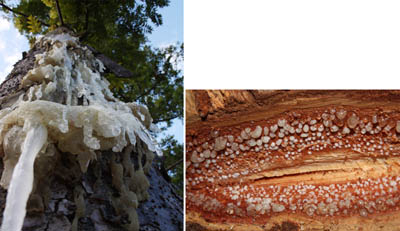 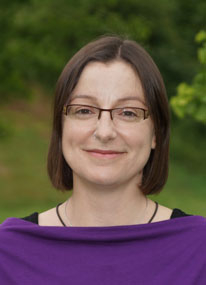