My research interest covers a wide variety of questions directed towards biodiversity, conservation and sustainable development. In my studies, I apply spatial point pattern statistics in order to analyze the spatial distribution of individuals and other point-like entities in a spatial context. The observed distribution patterns are often the result of one or multiple concurrent ecological processes that locally influenced individual behavior or success. A clever choice of different null models and the manipulation of the environment in multiple experiments allows me to infer the nature of those ecological processes that predominantly shaped the distribution of individuals in a landscape and also to estimate the spatial scale at which these processes operate.

Studying the spatial distribution of bacteria colonizing bean leaves, I was able to show that that intra- and interspecific interactions between bacteria as well as their interactions with the environment, i.e. the plant leaf surface, all operate concurrently and at different spatial scales. For example, I observed bacteria avoiding the regions within 30 µm around stomata (leaf organs involved in gas exchange) whereas, at the same time, an aggregation of the bacteria near trichomes (hair-like appendages of the leaf surface) was found in excess of 100 µm around these structures. Such information can be useful for modeling the bacterial leaf colonization process and, in long term, to develop sustainable management practices in agriculture (plant protection). 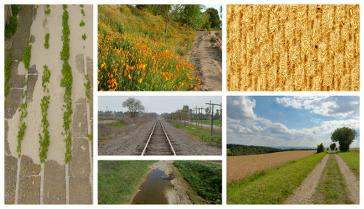 One important aspect of my dissertation project was the advancement of spatial point pattern statistics. In an interdisciplinary cooperation with the department for Stochastics and its Application at the University of Mannheim, I developed the line-to-point pair correlation function, which can be used to study the spatial distribution of individuals around linear structures such as bacteria colonizing near leaf veins. Beyond that, the line-to-point pair correlation function can be applied to any similar problem also in macroscopic ecology, such as the distribution or dispersal of species along linear structures in the landscape, e.g. roads, railroads or streams. Our new method thus habors great potential for biodiversity research and conservation practitioners. Further applications may even exist in other fields outside ecology, e.g. geology (faults), or material sciences (fibres). In a transdisciplinary cooperation with the University Medical Center Göttingen, I study the spatial distribution of various cell types along linear structures in a neuropathological context.

In the department of Ecosystem Modelling, I teach courses covering ecosystem theory and modeling, and spatial statistics.