Hoya species diversity in Jambi can be utilized by the local people as a new economic source (i.e., promoting it as an ornamental plant that can be exported overseas), in addition to research and development for future biomedicines. The information on hoya species and genetic diversity in Jambi is still very limited. Knowledge of the degree of impact of habitat changes to the species and genetic diversity of hoya in Jambi is lacking and is urgently needed to formulate appropriate conservation strategies and sustainable utilization of the species. Hoya species diversity has been assessed by field surveys at four different transformation systems: i.e., forest, jungle rubber, rubber plantations and oil palm plantations in the three locations Bukit Duabelas, Bukit Harapan and Bukit Sari in Jambi. We collected 58 total specimens from about 9 species of hoya and 2 species of Dischidia, which were mainly found in the forest. There was only one individual sample of Dischidia cf. imbricata, which was found in a jungle rubber plantation in Bukit Sari. There were species differences between locations, while only a single species, Hoya cf. revolute, was found in all locations. Most samples found were sterile, so identification was not clear yet. Only one species found was fertile and easily identified as Hoya rintzii. We are investigating the genetic diversity using microsatellite markers, as well as developing DNA barcode-based identification using rbcL and matK markers. 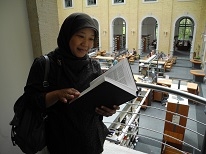