Space is a central factor when it comes to the analysis of past long-distance trade. Trade based on networks and the integration of markets are trending topics in economic history. They aim at the centre of the search for relations between actors and markets, especially when trade is being conducted over long distances.

The main goal of the project "Vormoderne Fernhandelsstraßen und regionales Wegenetz in Norddeutschland. Schaffung einer digitalen Infrastruktur für wirtschaftshistorische Forschungsvorhaben" is the creation of a web-based open access digital map of long-distance connections around 1500 in northern Europe, where the Hanseatic League was most present. This map will facilitate the research of landbound trade, especially in regard to the connection between highways and regional infrastructure. It provides a digital infrastructure for a number of research questions. The project is based on the prominent atlas „Hansische Handelsstraßen“ (1962-1968), of which the digitization will be the first step on the way to reach an apt scale for analysis and visualisation (i.e. around 1:50.000). The data deriven from teh atals and its voluminous text part will be enriched by further spatio-temporal information like fairs and markets, tollstations etc. Apart from the visualisation there will be possibilites for network and travel-time analyses, that in the end will give an idea of travel costs along the routes.

In the course of the project, that is being undertaken in close cooperation with the Research Center for Hanse and Baltic History until the end of 2020, the Institut für Historische Landesforschung will cover the region of today’s Niedersachsen. This part of the overall project is being funded by Pro*Niedersachsen.
A second part of the project that is being contributed by the University of Arhus from 2/2019 on will digitize the Danish roads.
A third part focusses on Thuringia and Saxony-Anhalt. It is based at the University of Magdeburg (Prof. Freund) and is being funded for a year by the Friedrich-Christian-Lesser-Foundation.
Further parts are in different stages of preparation and will cover the Netherlands and central Germany.
During the preparation of the project, Dr. Mauricio N. Vergara as Fellow of the Göttingen Center for Digital Humanities prepared a digital base map und created modes of analysis in respect to network and travel speed. A Workshop fostered the communication about this topic. 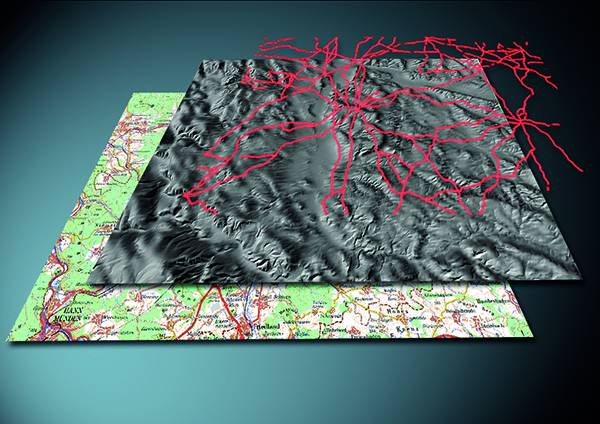