Diversity of microalgae and cyanobacteria communities in Antarctic soils: changes along soil developmental stages and abiotic variables and testing for endemism / geographical distribution

Abstract
Antarctic soils are ideal places to study particular features of soil microalgae and cyanobacteria left unexplored so far. These include inferring pioneer species at the colonization of young soils poor in nutrients and the development of soil microalgal communities without anthropogenic influence and that of vascular plant cover under harsh environmental conditions.

Soil samples along chronosequences from Antarctic glacier forefields (Maritime Antarctica and East Antarctica Continent), but also the dryer Polygon soils (Coal Nunatak) will be investigated. They will be provided and their abiotic variables determined through collaborations within the SPP 1158. 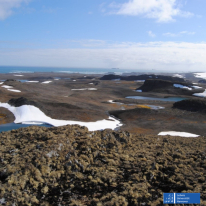