Diplom-Kaufmann [holder of a degree in business administration] Rüdiger Strehl has been active in university medicine since the late 1970s. From 1979 to 1993 he belonged to Berlin’s Ministry of Science (senate administration) and there was responsible for university medicine. During this time he oversaw amongst other projects the fusion of the University Hospital Charlottenburg and the Municipal Hospital Rudolf Virchow to the University Hospital Rudolf Virchow, the transfer of the Charité hospital following the unification of Germany as well as the fusion of the veterinary faculties of Berlin’s Humboldt University and Free University. From 1993 to 2008 he was commercial director of the University Hospital Tübingen. Strehl is member of the presidium and the board of the Association of German Hospitals as well as member of the Health Research Council and various national consultancy and evaluation commissions. From 2000 to 2006 he was chair of the Verband der Universitätsklinika Deutschlands e.V. (VUD) [University Hospitals Association Germany], since July 2007 he has been general secretary of the VUD. 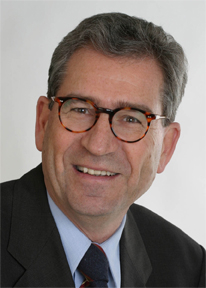