Esther took English and History at the University of Bonn (2007-2010) and spent one term in Belfast. She holds two masters degrees in Medieval Studies (University of Leeds, 2011, and University of Bonn, 2013). Esther is now a PhD student working on Latin quotations in anonymous Old English homilies and saints’ lives. Together with Steven Rozenski she translated Henry Suso’s Horologium Sapentiae into English. Esther now transcribes and encodes anonymous Old English homilies for the department’s Digital Homilies Project.

Esther is interested in all aspects of Old English homilies and saints’ lives; this includes their composition and their use of motifs, their Latin and Greek sources, their use of Latin and their palaeography. She is also interested other medieval Germanic languages such as Old Norse and Old Saxon. 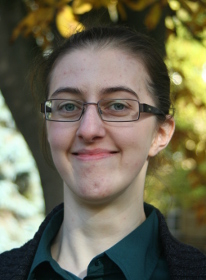