Mycorrhizas are the symbiosis between higher plants and fungi. The fungi enhances the nutrient supply of the plant by absorbing phosphate, nitrogen and other nutrients as well as water from the soil which are then transports to the plant. In return the fungus is given carbon compounds made by the plant via photosynthesis (Smith und Read 1997). Mycorrhizae are carbon sinks, up to 20% of all carbon compounds produced by the plant via photosynthesis are delivered to the fungi (Smith und Read 1997).

The Ectomycorrhiza (ECM) has three main components: hartig net, hyphal sheath and fungal mycelium in the soil. The hyphae of the ECM-fungi penetrate the root by growing between the root cells and enclosing the cells completely (hartig net), but the hyphae do not penetrate the root cells themselves. The branching of the net enhances the surface area for nutrient exchange between the plant and the fungi. The hartig net is the same for all Ectomycorrhizae. In contrast to this, the hyphal sheath is different for each fungal species. The hyphal sheath can vary in color, branching, shape of the hyphae in the soil, appearance of the rhizomorph and the structure of the inner surface of the hyphal sheath (Agerer 1987-2006).
Different projects at the institute investigated the relationship of ECM-communities and their diversities at various locations. The goal of the projects was to identify factors that influence the composition of the ECM-communities and their diversities. In the Graduierentenkolleg 1086 the impact of tree species composition was investigated, in the Beech Research group the influence of carbon was investigated. Within a project of Biodiversity Exploratories the influence of the management system of the forest and the soil composition on the ECM communities was investigated.
In all projects soil samples were collected and the existing ECM was analyzed by distinguishing the difference in appearance of the hyphal sheath (morphotypes). The morphotypes were photographed and described. The different fungi species of the different morphotypes were identified with the help of DNA sequencing (ITS-Region) and a comparison of these sequences with sequences already found in different databases (UNITE und NCBI ). The DNA sequences were submitted to the NCBI web page. Some of the fungi could not be identified to the species level; they were classified as UECM (Unknown Ectomycorrhiza). 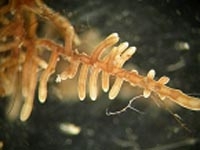