Ever since its foundation in 1737 the Georg-August-Universität has educated students in the fields of business and economics. Also, in the university’s research one of the core elements has been Economic Sciences since 1737. For the faculty’s build-up the formation of the “Seminar für Versicherungswissenschaft” (“Department of Insurance Sciences”) in the year 1895 as well as the foundation of the “Staatswissenschaftliches Seminar” (Department of Political Economics) in the year 1899 – as predecessor of the Department of Economics – were determining. The year 1922 was the beginning of the tendency to differentiate in Economics and Business Administration. Theses both trends, Economics as well as Business Administration, were developed continuously till Second World War.

The recommencement in the years after Second World War was hard. But already in 1950 and the following years the development of Economic Sciences in Göttingen began rapidly and in new dimensions: In the year 1951 a four-semester study in Business Administration as well as in Business and Human Resource Education was established. This programme of study developed to a full study-programme in Business Administration with the degree “Diplom-Kaufmann” (Diploma) in the years 1954/ 1955, and to a full study-programme in Business and Human Resource Education with the degree “Diplom-Handelslehrer” (Diploma) in the year 1961.

Furthermore, a multiplicity of new chairs was founded in the years since 1950. 1962 was the founding year of the Faculty of Economic and Social Sciences, which highly extended and differentiated in the Sixties. In addition to the permanent rising number of chairs in Business Administration and Economics, new chairs in Statistics and Econometrics, in Business and Human Resource Education as well as in Mathematics Methods and Data Processing were founded. Also, the education in Economic Sciences for lawyers came along. In the year 1970 the Faculty of Economic and Social Sciences was subdivided in two departments, the Department of Economic Sciences and the Department of Social Sciences. In 1981 the common faculty was dissolved, and the Faculty of Business and Economics became autonomous. Since 1997 the faculty is named „Wirtschaftswissenschaftliche Fakultät“ (Faculty of Business and Economics).

Today the Faculty of Business and Economics is one of the largest of its kind in Germany. More than 30 full professors and assistant ("junior") professors as well as 7 honorary professors work at our faculty and instruct together with about 200 academic staff and over 40 postdocs around 4,100 students.

Cf. Kaufhold, Karl Heinrich (1987). 250 Jahre Wirtschaftswissenschaften an der Georgia Augusta, in: Georgia Augusta. Nachrichten aus der Universität. Hochschulpolitik – Forschungsgeschichte – Universitätschronik, Vol. 47, pp. 51-57.
From 1974 to 1999 Prof. em. Dr. Karl Heinrich Kaufhold was owner of the chair in Economic and Social History at Georg-August-Universität Göttingen and from 1976 to 1978 dean of the Faculty of Economic and Social Sciences as well as from 1992 to 1993 dean of the Department of Economic Sciences. 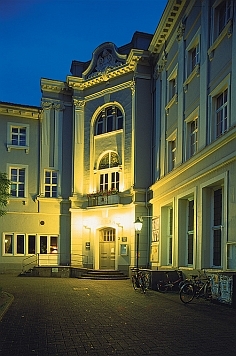