Background
In West and Central Africa, wildlife exploitation has been an important source of protein and income for rural communities who have few alternatives for either, constituting an integral part of livelihood. Though historically wildlife meat (“bushmeat”) extraction has been sustainable, current human population has in many areas surpassed the carrying capacity of forests. As a result, this important food and financial resource of poor communities is rapidly declining, putting at risk the future of a large section of the least privileged sections of the population. The dramatic pressure imposed on the populations of many targeted species, as well as the anticipated socioeconomic effects that a collapse of wildlife populations could have, has led many conservation and wildlife managers to talk of a “bushmeat crisis”.

In most countries, wildlife is considered state property and complex laws regulate access to it. In practice however, there has typically been little national-level active management outside of protected areas. This has resulted in the development of low-sense of ownership among local communities and an unregulated, illegal, and unmonitored “scramble” for quick-profiting from wildlife. In order to change this situation, governments are gradually contemplating devolving user rights to communities, creating the necessary incentive for a sustainable use of the resource. The major assumption of such community wildlife management (CWM) initiatives is that it is possible to both improve people’s livelihoods and to safeguard wildlife for future generations. The feasibility of this management model has been much debated but rarely tested in a holistic approach.

Study aims
The primary objective of the study is to develop effective and practical community-based wildlife management (CWM) systems for the Korup-Oban Hills region, by assessing the conditions under which bushmeat extraction can be ecologically, socially and economically sustainable. In addition, it is our intent to examine the role that different land-use systems can have in landscape-level wildlife management and conservation (complementing the existing network of protected areas).

Study Area
The Korup-Oban Hills region extends over 10,000 sq.km, saddling the Cameroon-Nigerian border from the Gulf of Guinea and inland for 130 km. It is part of the largest continuous forested area in the Cross-Sanaga Rivers biogeographical region and it is renowned for its rich biodiversity and high levels of endemism. Rainfall is high (2,500-4,500 mm) with a prolonged rainy season and a brief but pronounced dry season. Korup National Park (1,260 sq.km) and its Support Zone (including Nta Ali, Rumpi Hills and Ejagham Forest Reserves) forms the Cameroonian part of the study area. Local population density is 9.3/sq.km (50,000 inhabitants in 182 villages, including 1,500 in 5 villages within the park). The Cross River National Park’s Oban Division (3,000 sq.km) is located on the Nigerian side. Local population density is ~10/sq.km (40,000 inhabitants in 39 villages, including 2 villages within the park). The flora and fauna is similar across the study area and illegal hunting is a major problem for medium/large animals, the populations of which have in many places drastically declined due to the pressure. In Cameroon, remaining forests are relatively undisturbed, while in Nigeria intact rainforests are primarily limited to the most inaccessible, hilly areas.


To be developed with local participation, the MAS will serve as the main tool of the project for testing the social, economic and ecological sustainability of wildlife management scenarios proposed by local communities. It will take into consideration multiple parameters affecting the quality of rural livelihood (population dynamics, economics, local assets, infrastructure, access to services, food security, vulnerability to seasonal changes, policies, and local culture).


Although data for some sociological parameters considered by MAS will be extracted from existing government and NGO reports, additional data will be collected via interviews and surveys of local stakeholders. In addition, biological data for selected wildlife species (targeted by the bushmeat trade; i.e. duikers, large rodents) will be collected via recce walks and transect surveys.

Locals will participate in all stages of the project, from the development of the wildlife management scenarios to be tested in MAS to the final testing of selected models. 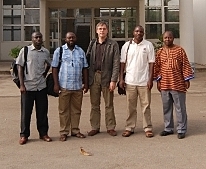