The objectives of the BioSTAR workgroup are the development and further improvement of the deterministic plant model BioSTAR.
BioSTAR has been developed for biomass energy potential assessment in the context of the research project "Sustainable use of bioenergy: bridging climate protection, nature conservation and society", but it can also be used for food security issues. Part of the BioSTAR philosophy is to provide a user-friendly and practicable user software tool (also for the non-scientific users) for the calculation of agricultural income (biomass, food).

Philosophy of the model

The crop model BioSTAR was originally developed for the assessment of large-scale as well as parcel-related biomass potentials for typical energy crops (maize (silage), grain cereals for silage). For this purpose a model was created and equipped with a CO2-based engine of growth (Azam Ali, 1994). Aim of the BioSTAR software was to enable a fast and uncomplicated processing of large data sets (climate, soil). This is done by providing data for the program in the form of Access database tables.
Database tables are easy to fill and to edit and can be (theoretically) infinitely large. BioSTAR handles climate records with monthly averages and daily values. Plant parameters can be edited by the user in the access tables and supplemented with new crops. A simulation of nitrogen flows (consumption of plants, fertilization, mineralization) is set in the model. In the current version of the model the user can choose between four different growth simulation methods (engine of growth) and four different evapotranspiration calculation methods (ET0 methods) (see user manual). The model is already tested for various crops (summer crops, winter crops, permanent crops) and is in a continuous development process.


Structure of the model 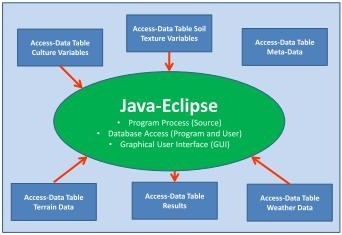 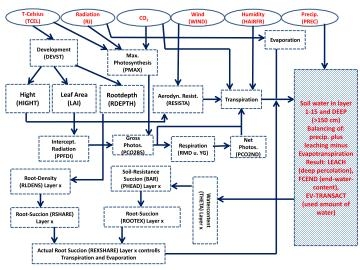 Partners of the Project: