I. Monitoring of arboreal arthropod communities across a land-use gradient in Sumatra, Indonesia

Tree canopies comprise the bulk of animal biodiversity in tropical rainforests. Much of this diversity is strongly affected by transformation of rainforests into other forest systems or arable land as many of the arthropods are specialists feeding only on certain plant species or preying on a narrow spectrum of invertebrates. Numerous of these species are assumed to go extinct before they have been recorded by science.

Within the Central Scientific Support Unit 990 (‘EFForTS’-project: Ecological and Socioeconomic functions of tropical lowland rainforest transformation systems in Sumatra, Indonesia), I main aim is thus to measure aboveground biodiversity patterns across a land-use gradient (old growth secondary forest, jungle rubber, rubber and oil palm plantations) by sampling arboreal arthropod communities. Arthropods will be sampled by fogging with a knock-down insecticide, and analyzed by functional groups (or guilds) to reveal potential differences in food-web structure between ecosystems along the land-use gradient.

Although arboreal in the adult stage, many of the arboreal species may temporally reside or seek refuge in soil and it is increasingly realized that above- and belowground communities are more closely linked than previously assumed. Above- and belowground animal communities therefore form interlinked compartments of the food web of terrestrial ecosystems. By jointly analyzing data sets across the various workgroups within the CRC990/EFForTS-project, we therefore hope to gain an in-depth understanding of agricultural impacts on the biological diversity and ecosystem stability of tropical rainforest ecosystems.

The Yellow Crazy Ant Anoplolepis gracilipes is an invasive ant species that is widespread throughout SE-Asia and the Indopacific. A. gracilipes plays a variety of roles depending on the habitat it is found in: it can be a harmful invader of natural ecosystems, a crop pest in agricultural ecosystems, and a general nuisance in settlements and urbanized habitats.

Despite being currently widespread across SE-Asia and the Indopacific, the origin of A. gracilipes still remains unclear. By studying its ecology, genetic diversity and population structure in Indonesia elucidate whether or not A. gracilipes might have evolved in SE-Asia.

Like other invasive ant species, A. gracilipes displays characteristics that set them apart from most other ant species. These characteristics include the ability to form large supercolonies, which may contain hundreds of queens in hundreds of nests, spanning over dozens of kilometres. A. gracilipes supercolonies often are at a numerical advantage over native ant species, since complete tolerance between workers from different nests lead to reduced costs associated with territoriality within supercolonies. One of my aims is to further reveal the mechanisms facilitating colony cohesion in these supercolonies. An important factor may be the reproduction system of A. gracilipes, which is likely to differ substantially from that of most other ants, and which leads to unusually high levels of relatedness between workers of the same supercolony. 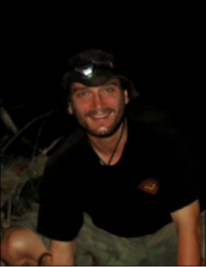