Contexts of Learning in Baghdad
from the 8th-10th Centuries

The city of Baghdad which Arabic poets extolled as a »paradise on earth« is situated on both banks of the river Tigris. This dynamic city was the centre of the Abbasid caliphate and the cultural metropolis of the Islamic world for centuries. Its political, economical, and
scholarly impact on Islamic culture is enormous. In the vicinity of the old Aramaean settlement Bagdadu, al-Mansur, the second Abbasid caliph, built on the Western bank of the Tigris in 763 CE his palatial town which he called »City of Peace (Madinat al-Salam)«.
Moving the capital to Baghdad led to a large-scale influx of military personnel, merchants, craftsmen and scholars and to a notable increase of cultural patronage.

Beside being an important place for manufacture of goods, Baghdad became the home of the Hanafi and Hanbali schools of law. It was the centre of the translation movement. Its mosques, in particular al-Mansur’s Friday Mosque, were great centres of learning. Bookshops, public libraries, teaching institutions and literary salons promoted not only Islamic but also Christian and Jewish learning. This vibrant academic milieu brought forth intense inter-religious discussions and enabled scientific exchange between the various religious groups within and outside Islam.

The international conference »Contexts of Learning in Baghdad from the 8th-10th Centuries« will examine these inter-religious settings of education and will focus on circles of learning which dominated the cultural life in Baghdad. From different perspectives, it will tackle
in an interdisciplinary manner issues like teaching devices of the Qur’an, the function of the »House of Wisdom (Bayt al-Hikma)«, historical learning, literary circles, studying natural sciences as well as Christian and Islamic approaches to education.

Registration for participation at the conference is requested. 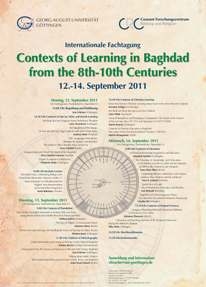