2. It does not activate the important jasmonic acid/ethylene-dependent immune response which is effective against pathogens that kill host cells (necrotrophs) (Zander et al., 2010).

3. It does not activate many genes of the detoxification program upon treatment with toxic chemicals (Fode et al., 2008).

TGA-related projects in my lab: 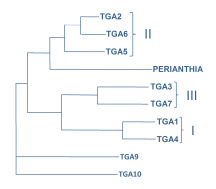 The family of TGA factors has 10 members in the model plant Arabidopsis thaliana.