I. Formation of the centrosome and the primary cilium

The centrosome is the main microtubule organizing center (MTOC) of the animal cell, located at the cell center at the vicinity of the nucleus. Important not only for the cytoskeletal architecture, for cell shape and cell motility, but moreover for ordered localisation of organelles, i.e. the Golgi apparatus. The centrosome in addition organises the mitotic spindle apparatus and is therefore important for chromosome segregation and maintaining life through generations. Very recently, the centrosome has come into focus as a cellular organelle involved in cell cycle progression and cytokinesis. A huge amount of centrosomal proteins have already been described but their functions are mostly unknown.
The centrosome of the animal cell consists of two centrioles surrounded by a pericentriolar matrix (PCM). Although mainly built of tubulin, both centrioles of a centrosome are functionally and structurally unequivalent. The older or mother centriole is characterized by the presence of appendages that are formed during cell cycle progression. Moreover, when cells escape the cell cycle the mother centriole eventually give rise to the basal body that outgrows a primary cilium. The primary cilium is found on most cells of the adult body and functions as a sensory organelle. Disturbances of primary cilia underly a lot of human diseases, e.g. kidney diseases, left-right axes formation and hydrocephalus. We are interested specifically in proteins of the appendages that are important for formation of primary cilia. The main questions we are asking are:

1. Which proteins interact in formation of the appendages and the primary cilium and what is their cellular function.
2. How are genes encoding centrosomal and ciliary proteins regulated at the transcriptional level.
3. Is there a cell cycle dependent transcriptional regulation of those genes.
4. Is deregulated expression of those genes involved in tumour progression.
5. How is the centrosome linked to the nucleus.

The basal body with its primary cilium (red/green) is shown atop the nucleus (in blue) of a fibroblast cell.

II. Alterations of chromatin structure and formation of silent chromatin during differentiation

The organization of chromatin into higher-order structures determines the functional state of chromosomes. In all higher eukaryotes two functional chromatin states can be distinguished. In contrast to loosely packaged euchromatin that is engaged in transcription, heterochromatic regions are largely inaccessible. Heterochromatin that remains condensed throughout the cell cycle is defined as constitutive heterochromatin. It mainly consists of repetitive sequences and is regularly found at pericentromeric regions, at nucleolus organizer regions and at telomeres. Facultative heterochromatin largely consists of euchromatic regions that have undergone heterochromatinization and gene silencing. Epigenetic gene silencing by facultative heterochromatinization may affect whole chromosomes, as found in X chromosome inactivation of mammals, or just limited euchromatic regions, as in position-effect variegation (PEV). Moreover, it represents a mechanism for permanent gene inactivation, e.g. in X inactivation, but could also result in temporary inactivation, e.g. transcriptional repression of gonosomes in meiotic prophase of male mammals.
Facultative heterochromatinization of gonosomes in male meiotic prophase eventually resulted in the formation of a heteropycnotic XY-body and meiotic sex chromosome inactivation (MSCI). Transcriptional inactivation of sex chromosomes starts at early prophase but lasts just after the meiotic divisions at which time gonosomal genes are recommitted to transcription. MSCI and formation of facultative heterochromatin came along with chromatin modifications and the recruitment or enrichment of certain proteins, e.g. the heterochromatinprotein HP1ß and the testis-specific histone H3 methyltransferase suvar39h2 as well as with histone macroH2A. Histone macroH2A consists of a histone region and a so-called macro domain. The macro domain is evolutionary conserved from viruses to man including plants therefore suggesting an important function. However, the function of the macro domain and of histone macroH2A are unknown. We are interested in the following aspects: 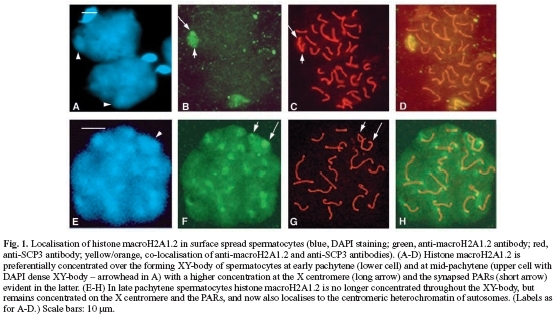 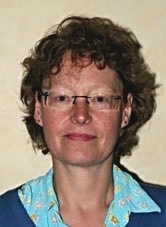 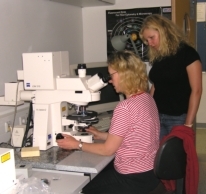