We are also interested in the functional analysis of fungal inteins. An intein is a self-catalytic protein-intervening sequence that catalyzes its precise excision from a host protein and the ligation of its flanking sequences, termed N- and C-exteins, to produce the mature spliced product. Protein splicing is a posttranslational event that releases an internal intein sequence from a protein precursor. Projects in the lab aim to analyze the splicing activity of inteins detected in the prp8 gene of fungi. The PRP8 protein is one of the largest and most highly conserved nuclear proteins occupying a central position in the catalytic core of the spliceosome. Because of their compactness and high splicing activity inside foreign proteins, fungal PRP8 inteins may be used for the development of new intein-mediated protein-engineering applications such as protein purification, addition of fluorescent biosensors and expression of cytotoxic proteins. 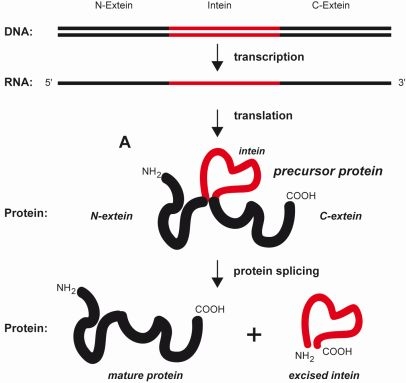