Teaching at the University of Göttingen since 2010.  Previously, Babette Tischleder held positions at the John F. Kennedy Institute, Free University of Berlin (2007-2010), the Universities of Freiburg and Paderborn (2006-2007), and the University of Frankfurt am Main (1996-2006).  She lives in Berlin.
Out now:
An Eclectic Bestiary: Encounters in a More-than-Human World.
Edited with Birgit Spengler. Transcript Verlag, Series: Human-Animal Studies.

In recent years, Tischleder's research has focused on the questions of materiality, obsolescence, and the agency of the nonhuman—from cherished objects and animated robots to the life of garbage and the truculence of rivers. Addressing different aesthetic and narrative modes, she has studied literature, screen media, and digital animation in their respective material, geological, and historical contexts. She asks how these creative practices contribute to building the worlds we inhabit and how they reflect the current ecological trouble—the precarity of humans and other species, our bodies, habitats, and endangered futures in the age of the Anthropocene.
Currently Babette Tischleder is also collaborating with Jeffrey Sconce (Northwestern University) on a book project entitled "Serial Chronotopes Across Media." It asks how serial narratives engender social and cultural diversity by creating complex diegetic worlds that producers and viewers become equally invested in. Bakhtin's notion of the chronotope serves as a central concept for apprehending both the productive and the receptive dimensions of serial storytelling.

Her teaching offers a wide a range of topics in literary, cultural, and media studies. The two-semester lecture course "Introducing Critical Theory" covers approaches in literary, cultural, and media theory: from New Criticism to ecocriticism, gender and queer studies, postcolonial and critical race studies in part I; part II covers the historical development of media, film, and television theory, actor-network-theory and thing theory, and approaches to new media and digital culture. Recent courses in the BA program include an introduction to analyzing screen media; seminars on the road movie, television narrative, and African American film; graduate course on diverse U.S. cities in literature and the arts, nineteenth-century media culture, and topics such as "Creative Nonfiction," "Animals, Androids, Artifacts," "Caribbean Diasporic Writing," "The American West," and "Racial Passing in Literature and Film."

Tischleder's recent books include the co-edited volume An Eclectic Bestiary: Encounters in a More-than-Human World (2019), which explores literary, sonic, and visual imaginaries that feature encounters between and across a variety of living creatures. Tischleder's introduction "Multispecies Chronotopes" offers a number of critical keywords that suggest ways of thinking creatively beyond a human-centered world. The Literary Life of Things: Case Studies in American Fiction (2014) engages with a range of texts, from Harriet Beecher Stowe to Jonathan Franzen, disclosing our affective, aesthetic, and ethical entanglements with the object world. Cultures of Obsolescence: History Materiality, and the Digital Age (2015), edited with Sarah Wasserman, is dedicated to historical, architectural, and digital forms of obsolescence, as they are reflected in contemporary art, photography, literature, and theory.

Two recent essays, "Earth According to Pixar: Picturing Obsolescence in the Age of Digital (Re)Animation" (2016) and "Thinking Objects, Building Worlds: Why the New Materialisms Deserve Literary Imagination" (2018), consider a Pixar movie and writings by Twain, Faulkner, and Bruno Latour respectively, asking how these texts project and problematize the agency of the nonhuman — the forces of floods, pollution, and the interspecies entanglements on a damaged planet that historical and fictional characters have to face. The essay "Thickening Seriality: A Chronotopic View of World Building in Contemporary Television Narrative" (2017) critically engages with current theories of seriality and proposes Bakhtin's concept of the chronotope as a way of thinking through the intricacies of serial world building both in terms of narrative production and audience investment.

“Planetary Figures and Sublunary Zones: A Critique of Bruno Latour's Gaia Project.” Lecture Series of the Scherer Center for the Study of American Culture, co-sponsored by the Department of English, University of Chicago, 8 November 2018. 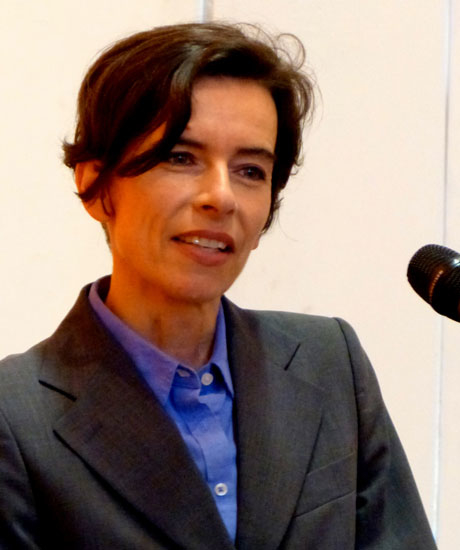 PLEASE NOTE: Due to the corona virus, the regular office hours have been cancelled. Please contact Prof. Tischleder by email:
tischleder(at)phil.uni-goettingen.de