From 2003-2007 Derya Nuhbalaoglu studied Turkish Language and Literature at Bogazici University, Turkey. From 2008-2010 she worked as a research assistant at Department of Turkish Language and Literature, Bogazici University. In 2010 she received her MA degree in Linguistics with the thesis entitled “On the Empty Onsets in Turkish: A Government Phonology Approach” supervised by Dr. Markus Pöchtrager from Bogazici University. Between January 2012-July 2014 she has worked as a research assistant for the TIDBIL-TUBITAK Project: “Model for a Reference Grammar of Sign Languages: Methods of Description and Analysis of Sign Patterns in light of Turkish Sign Language” at Bogazici University. Since October 2014 she has been working as a research assistant at the Department of German Philology in the DFG funded project entitled “Discourse Referents in Space -Anaphora Resolution in German Sign Language” at Georg-August University of Göttingen. Under supervision of Prof. Markus Steinbach she writes her doctoral dissertation which focuses on discourse referents at syntax-pragmatics interface in German Sign Language (DGS) and Turkish Sign Language (TID). Derya Nuhbalaoglu is a part of Early Career Research Group “Language, Cognition and Text” at Graduate School of Humanities Göttingen (GSGG) and a member of Courant Research Centre “Text Structures. 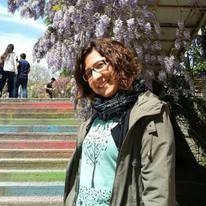