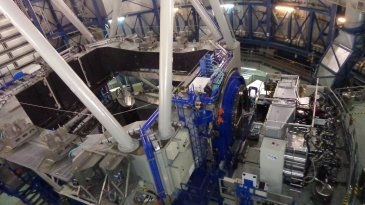 Fig.1: Mounted to UT4 of the ESO/VLT: The MUSE installation on the Nasmyth platform (on the right), the 8 m primary mirror (on the left) is prepared for active compensation of atmospheric seeing by laser generated artificial stars through laser beacons mounted to the four visible platforms. © J.L. Lizon/ ESO

The Multi Unit Spectroscopic Explorer (MUSE) is a second-generation VLT panoramic integral-field spectrograph under preliminary design study. MUSE has a field of 1x1 square arcmin sampled at 0.2 x 0.2 square arcsec and is assisted by the VLT ground layer adaptive optics ESO facility using four laser guide stars. The simultaneous spectral range is 465-930nm at a resolution of R ~ 3000. MUSE couples the discovery potential of a large imaging device to the measuring capabilities of a high-quality spectrograph, while taking advantage of the increased spatial resolution provided by adaptive optics. This makes MUSE a unique and tremendously powerful instrument for discovering and characterizing objects that lie beyond the reach of even the deepest imaging surveys. MUSE has also a high spatial resolution mode with 7.5 x 7.5 square arcsec field of view sampled at 25 milli-arcsec. In this mode MUSE should be able to obtain diffraction limited data-cubes in the 600-930nm wavelength range. Although the MUSE design has been optimized for the study of galaxy formation and evolution, it has a wide range of possible applications; e.g. monitoring of outer planets atmosphere, environment of young stellar objects, super massive black holes and active nuclei in nearby galaxies or massive spectroscopic surveys of stellar fields in the Milky Way and nearby galaxies. A summary of the main instrument parameters is listed below. 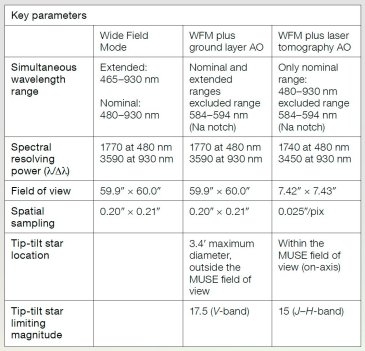 January 19: Re-integration completed in NIH hall on Paranal with transport and lift into its final position, the Nasmyth platform at UT4.

January 31: ´First-Light´ with operation at the UT4 of the VLT (still without the Galacsi-AO).

February 21: End of a three-weeks test phase (Commissioning-1) at the UT4 with first on-sky images . 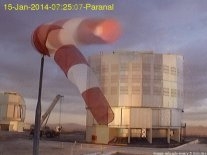