Dynamics of Canon Formation: Musical Exploration of the Benefits and Limits of Canonisation Theories

An LP containing Madonna's "Like a Virgin", a recording of Ravi Shankar's performance of "Raga Manj Khamaj" at Woodstock, Psy's Youtube video of "Gangnam Style" and musical notations of Beethoven's "Für Elise". Albeit utterly different in their material form, musical content, and historical and cultural context, all of these examples could be considered as a part of an evolving musical canon.

Within various musicological disciplines and cultural studies, much has been discussed about the intricate dynamics of canon formation. Informed by critical theories that also shaped New Musicology and Critical Musicology, musical canon debates in (Ethno)musicology sought to move away from multifarious modes of "disciplining" music which were prevalent until the late 1980s (cf. Bergeron and Bohlman 1992). Most of the musicological approaches to musical canon focused on the complexity of sonorous, cultural, material, ideological, historical, normative boundaries. But at the same time, they could fall into the trap of promoting a specific mode of listening that objectified music, be it "hierarchical" (cf. Bergeron and Bohlman 1992) or "structural" (cf. Subotnik 1996; Dell'Antonio 2000), while excluding certain musics from (academic) canons based on very specific, often Euro-centric, notions of musical aesthetics and functions.

In an effort to understand diverse canon formation processes involving a range of musical forms, we propose to examine some of the key theories of musical canons as they relate to folk, popular and classical music as follows. Philip Bohlman (1988) posited three categories of "small group canon", "mediated canon" and "imagined canon" for folk music. Adapting Bohlman's theory, Antti-Ville Kärjä (2006) developed three criteria of "alternative canon", "mainstream canon" and "prescriptive canon" for popular music. As for the European classical music tradition, William Weber (1999) proposed "scholarly canon", "pedagogical canon" and "performing canon".
The breadth of these theories highlights questions about the nature and form of, and ideologies behind canon formation, and the multifarious dynamics of musical inclusion and exclusion. While such classifications certainly offered us a much welcome alternative to the aforementioned normative and exclusive aesthetic categorizations, the question remains how, or, maybe better, whether we can avoid the inherently disciplining work that all typologies do, when we - as an audience, critic, musicologist, ethnomusicologist or anthropologist - seek to understand the musics we love so much.
In this workshop, we will critically engage with this question through an examination of various case studies of musical canon and rigorous theoretical discussions from various perspectives, including cross-genre and cross cultural points of view. The 1st half of the workshop will explore specific case studies presented by the participants (15 minutes presentation plus 5 minutes questions, each) who will address a range of questions and issues including:

(1) How the dynamics of canon formation, in each case study, is shaped by various elements such as musical and performance styles, commercial interests and economic motivations, media representation, technology, industries, mobility, physicality and materiality, ethnicity and race, politics and ideologies, aesthetics, historicity, etc. etc.? And what makes each case study of musical canon unique?

(2) How useful, if at all, are the canonization theories and categories, when applied separately or in combination, as analytical tools and how is it theoretically productive to examine the canon formation in terms of a "typological" concept?

Building upon our exploration of differences and similarities between these musical case studies, the second half of the workshop will take the form of a round table discussion with all participants including the participating audience members. During this open discussion, we alternate between what we learned from the case studies and the macro-theoretical discussions, in order to explore the many tensions and dynamics between knowledge and power present in the academic disciplines as well as practical fields of cultural/creative/music industries. 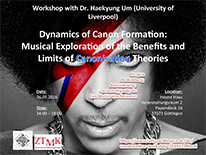