Scientists use new method to find small exoplanets which previous surveys had overlooked.

Scientists at the Max Planck Institute for Solar System Research (MPS), the University of Göttingen, and the Sonneberg Observatory have discovered 18 Earth-sized planets beyond the solar system. The worlds are so small that previous surveys had overlooked them. One of them is one of the smallest known so far; another one could offer conditions friendly to life. The researchers re-analyzed a part of the data from NASA's Kepler Space Telescope with a new and more sensitive method that they developed. The team estimates that their new method has the potential of finding more than 100 additional exoplanets in the Kepler mission’s entire data set. The scientists describe their results in the journal Astronomy & Astrophysics.

Somewhat more than 4000 planets orbiting stars outside our solar system are known so far. Of these so-called exoplanets, about 96 percent are significantly larger than our Earth, most of them more comparable with the dimensions of the gas giants Neptune or Jupiter. This percentage likely does not reflect the real conditions in space, however, since small planets are much harder to track down than big ones. Moreover, small worlds are fascinating targets in the search for Earth-like, potentially habitable planets outside the solar system.

The 18 newly discovered worlds fall into the category of Earth-sized planets. The smallest of them is only 69 percent of the size of the Earth; the largest is barely more than twice the Earth's radius. And they have another thing in common: all 18 planets could not be detected in the data from the Kepler Space Telescope so far. Common search algorithms were not sensitive enough.

In their search for distant worlds, scientists often use the so-called transit method to look for stars with periodically recurring drops in brightness. If a star happens to have a planet whose orbital plane is aligned with the line of sight from Earth, the planet occults a small fraction of the stellar light as it passes in front of the star once per orbit.

"Standard search algorithms attempt to identify sudden drops in brightness," explains Dr. René Heller from MPS, first author of the current publications. "In reality, however, a stellar disk appears slightly darker at the edge than in the center. When a planet moves in front of a star, it therefore initially blocks less starlight than at the mid-time of the transit. The maximum dimming of the star occurs in the center of the transit just before the star becomes gradually brighter again," he explains.

Large planets tend to produce deep and clear brightness variations of their host stars so that the subtle center-to-limb brightness variation on the star hardly plays a role in their discovery. Small planets, however, present scientists with immense challenges. Their effect on the stellar brightness is so small that it is extremely hard to distinguish from the natural brightness fluctuations of the star and from the noise that necessarily comes with any kind of observation. Heller's team has now been able to show that the sensitivity of the transit method can be significantly improved, if a more realistic light curve is assumed in the search algorithm.

"Our new algorithm helps to draw a more realistic picture of the exoplanet population in space," summarizes Michael Hippke of Sonneberg Observatory. "This method constitutes a significant step forward, especially in the search for Earth-like planets."

The researchers used data from NASA’s Kepler space telescope as a test bed for their new algorithm. In the first mission phase from 2009 to 2013, Kepler recorded the light curves of more than 100,000 stars, resulting in the discovery of over 2300 planets. After a technical defect, the telescope had to be used in an alternative observing mode, called the K2 mission, but it nevertheless monitored more than another 100,000 stars by the end of the mission in 2018. As a first test sample for their new algorithm, the researchers decided to re-analyze all 517 stars from K2 that were already known to host at least one transiting planet.

In addition to the previously known planets, the researchers discovered 18 new objects that had previously been overlooked. "In most of the planetary systems that we studied, the new planets are the smallest," co-author Kai Rodenbeck of the University of Göttingen and MPS describes the results. What is more, most of the new planets orbit their star closer than their previously known planetary companions. The surfaces of these new planets therefore likely have temperatures well in excess of 100 degrees Celsius; some even have temperatures of up to 1000 degrees Celsius. Only one of the bodies is an exception: it likely orbits its red dwarf star within the so-called habitable zone. At this favorable distance from its star, this planet may offer conditions under which liquid water could occur on its surface - one of the basic prerequisites for life as we know it on Earth.

Of course, the researchers cannot rule out that their method, too, is blind to other planets in the systems they investigated. In particular, small planets at large distances to their host stars are known to be problematic. They require more time to complete a full orbit than planets orbiting their stars closer in. As a consequence, the transits of planets in wide orbits occur less often, which makes their signals even harder to detect.

The new method developed by Heller and his colleagues opens up fascinating possibilities. In addition to the 517 stars now being investigated, the Kepler mission also offers data sets for hundreds of thousands of other stars. The researchers assume that their method will enable them to find more than 100 other Earth-sized worlds in the data of the Kepler primary mission. “This new method is also particularly useful to prepare for the upcoming PLATO mission to be launched in 2026 by the European Space Agency”, says Prof. Dr. Laurent Gizon, Managing Director at the MPS. PLATO will discover and characterize many more multi-planet systems around Sun-like stars, some of which will be capable of harboring life.

Transit least-squares survey. I. Discovery and validation of an Earth-sized planet in the four-planet system K2-32 near the 1:2:5:7 resonance,

Institute for Astrophysics and 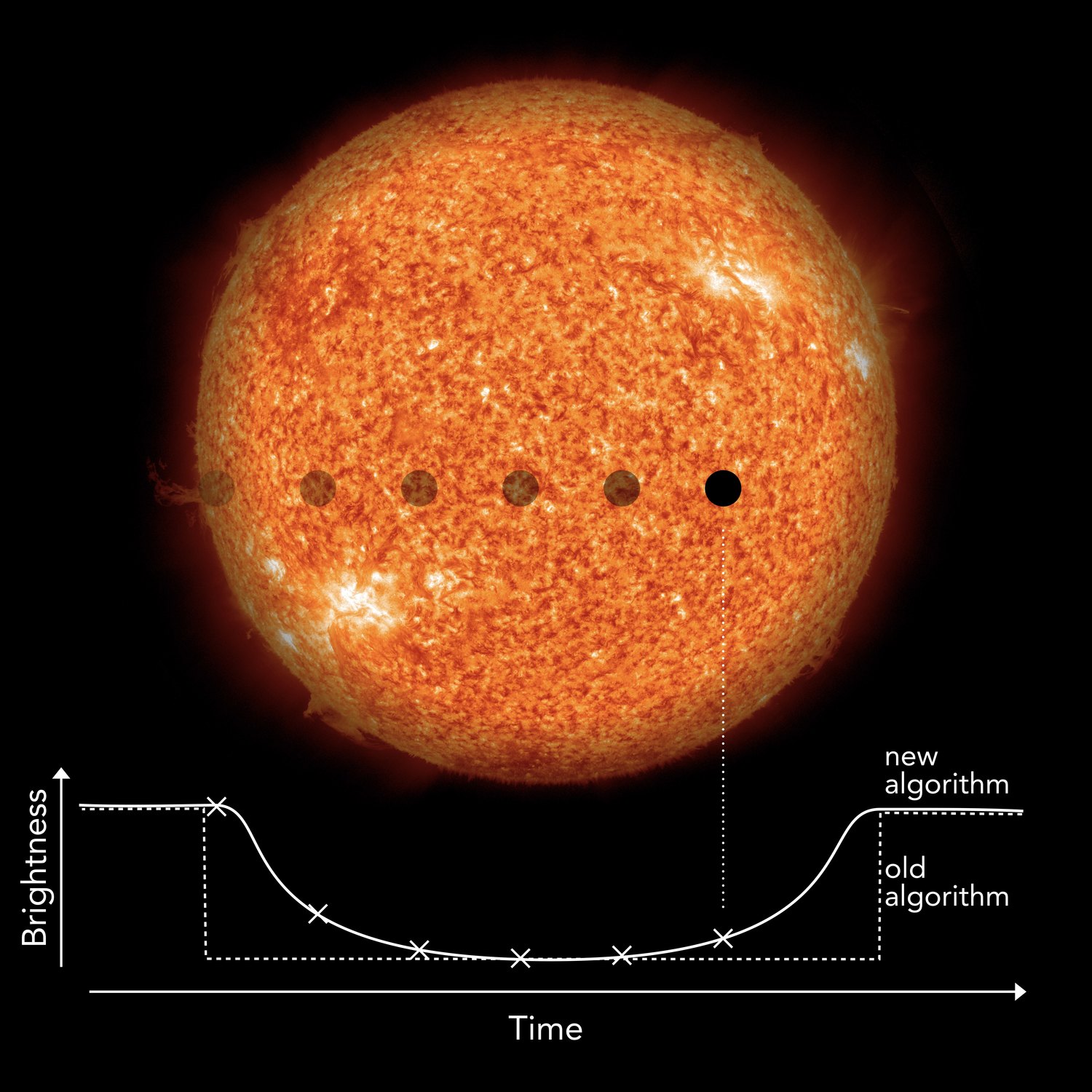 If the orbit of an extrasolar planet is aligned in such a way that it passes in front of its star when viewed from Earth, the planet blocks out a small fraction of the star light in a very characteristic way. This process, which typically lasts only a few hours, is called a transit. From the frequency of this periodic dimming event, astronomers directly measure the length of the year on the planet, and from the transit depth they estimate the size ratio between planet and star. The new algorithm from Heller, Rodenbeck, and Hippke does not search for abrupt drops in brightness like previous standard algorithms, but for the characteristic, gradual dimming and recovery. This makes the new transit search algorithm much more sensitive to small planets the size of the Earth. 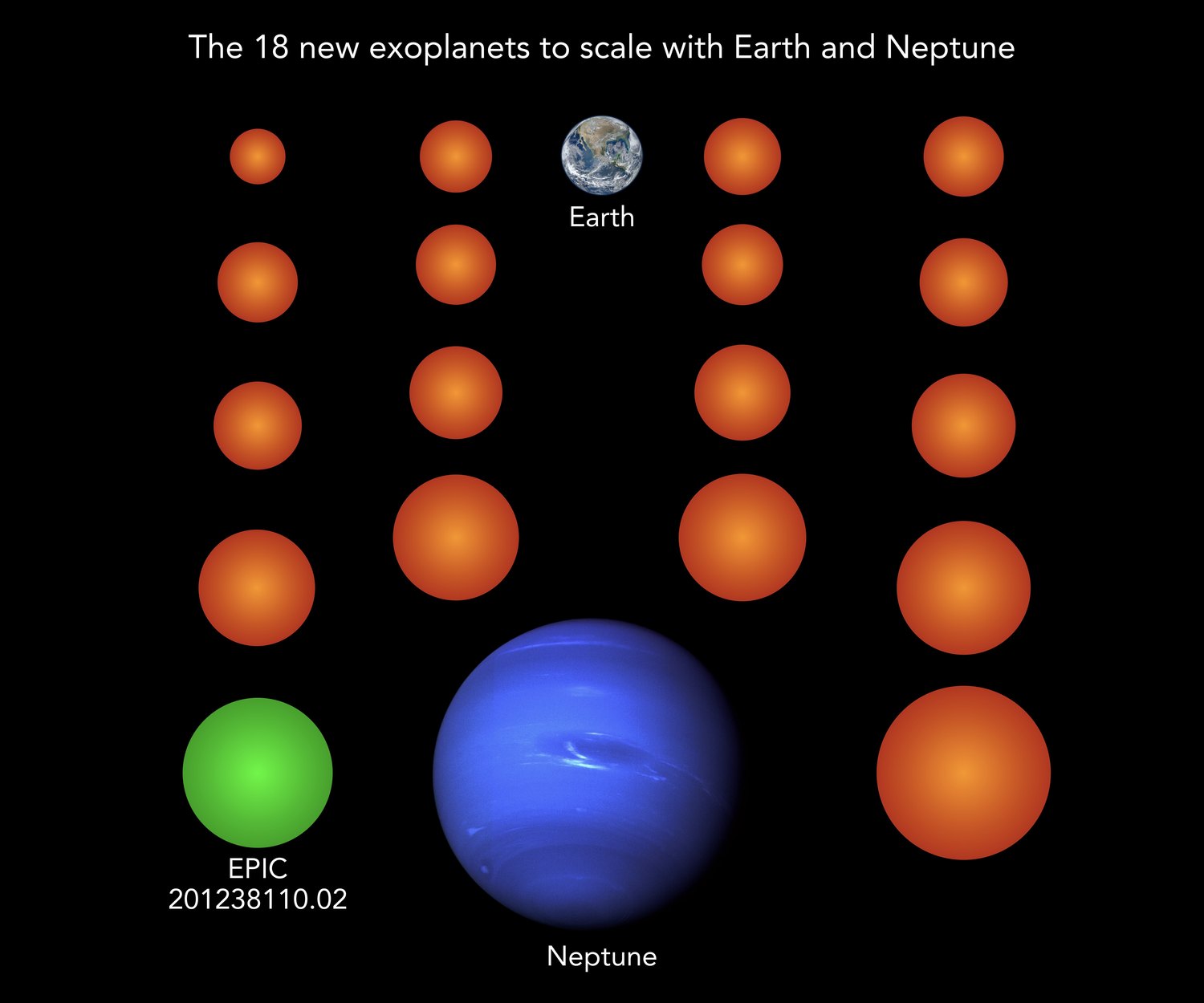 Almost all known exoplanets are larger than Earth and typically as large as the gas planet Neptune. The 18 newly discovered planets (here in orange and green), for comparison, are much smaller than Neptune, three of them even smaller than Earth and two more as large as Earth. Planet EPIC 201238110.02 is the only one of the new planets cool enough to potentially host liquid water on its surface.