More than 600 scientists, from every country in the EU, and 300 Brazilian indigenous groups have joined forces to highlight the destruction of the environment and human rights violations promoted by trade with Brazil. Seventeen researchers from the University of Göttingen have joined the call for sustainable action, which was published in the journal Science.

For some time now, the transformation of the Brazilian rainforest has led to violent conflicts with the indigenous populations living there. According to the authors, however, violence has recently increased dramatically and at least nine people have died as a result of these conflicts in the last few months alone. In addition, enormous quantities of carbon dioxide would have been released and numerous species made extinct.

"The EU is the world market leader in the import of goods resulting from deforestation," says Professor Teja Tscharntke, Head of the Department of Agricultural Ecology at the University of Göttingen and co-signatory of the report. "EU trade with Brazil promotes climate change and violates human rights.” The imports alone between 1990 and 2008 represent a loss of forest corresponding to an area the size of Portugal. The authors criticise that the EU imported animal feed worth more than two billion euros in 2017 without knowing or caring whether the production area came from destroyed rainforests or from conflicts with indigenous groups. Brazilian rainforest disappeared at a rate of more than one football pitch every hour between 2005 and 2013.

Brazil is the EU's second largest trading partner, and the authors argue that the EU should show responsibility for sustainable trade and stick to their objectives for human rights, environmental protection and climate change more seriously. It is important for the EU to define criteria for sustainable trade in cooperation with key stakeholders, in particular indigenous groups in Brazil. Sônia Guajajara, spokesperson for more than 300 Brazilian indigenous groups, says: "Europe and other markets in the world must learn to use their power as consumers."

"We want to prevent the EU from supporting deforestation through its imports and instead become the world market leader in sustainable trade," says lead author Dr Laura Kehoe, postdoctoral fellow at Oxford University. "We protect forests and human rights at home, so why do we follow different rules when it comes to imports?” 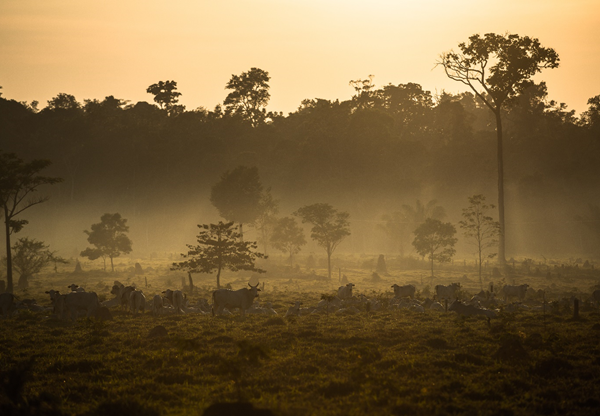 Rainforest gives way to pastures in the Brazilian Amazon in Mato Grosso.