Oribatid mites are involved in decomposition processes, formation of soil structure and nutrient cycling in most soils worldwide. The main habitats of oribatid mites are litter and soil but they also occur numerously on tree trunks, dead wood, marine intertidal zones and freshwater habitats. Especially in forest ecosystems they reach high local density and diversity and often dominate arthropod fauna in edaphic and arboreal habitats where they form an important part of the food web. Although oribatid mites are often regarded as a functional group of primary decomposers they feed on a wide range of food resources including lichens, mosses, algae, litter, fungi and nematodes. The exceptionally high proportion of oribatid mite species reproducing via parthenogenesis and the co-occurrence with sexual species in the same habitats make oribatid mites an interesting model group for ecological and evolutionary research.

I started working with oribatid mites during my diploma thesis in 2009 where I investigated the effects of nitrogen and phosphorus fertilizers on soil living organisms in the tropical montane rainforests of southern Ecuador (Research Unit of the DFG 402: Functionality in a Tropical Mountain Rainforest: Diversity, Dynamic Processes and Utilization Potentials under Ecosystem Perspectives).
In my PhD thesis from 2011-2016, as part of the Biodiversity Exploratories (DFG Priority Programme 1374), I investigated oribatid mite density, diversity, community structure and the proportion of parthenogenetic individuals across regions, forests types and habitats. Furthermore, I investigated the importance of root-derived resources for soil living oribatid mite communities by root-trenching, and assessed the trophic diversity on the bark of dead wood using stable isotopes.

In the framework of the SPLIDRHEX-Project (Cluster of Excellence 'Functional Biodiversity Research' University of Göttingen) I currently investigate the effects of litter and tree identity and diversity on oribatid mite densities and community structure. 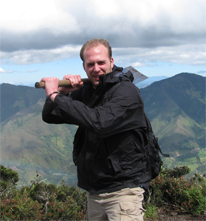