GSEP 5: Of Body Snatchers and Cyberpunks


Since its beginnings, science fiction has served as an intellectual playground where pressing issues such as scientific and technological progress, population growth, nuclear power, environmental protection, or genetic engineering have been projected onto different times and spaces in order to warn about inherent dangers, offer solutions, or to simply speculate about and experiment with the future. In the summer term of 2009, students from the University of Göttingen and the University of Siegen participated in two parallel courses entitled “Of Body Snatchers and Cyberpunks: American Science Fiction Film from the 1950s to the Present” and met for an undergraduate conference in Göttingen where they presented and discussed their research on American science fiction film together with Eric S. Rabkin, professor at the University of Michigan (USA) and an international expert in the field. The result of this project is the present volume of twelve student essays that were first presented at the conference, and then selected and revised for publication. Considering science fiction film as an essential element of American popular culture, the essays analyze and discuss the films Invasion of the Body Snatchers (Siegel, 1956), 2001: A Space Odyssey (Kubrick, 1968), Soylent Green (Fleischer, 1973), The Matrix (Wachowski, 1999), and Minority Report (Spielberg, 2002) against the background of social, political, cultural, and/or ecological developments in their contemporary U.S. societies. The introductory essay outlines the theoretical, methodological, and didactic considerations that informed the planning and teaching processes of the course format and the conference. The collection also features an autobiographical essay by Eric S. Rabkin in which he reflects on his personal experiences and lifelong fascination with science fiction films.

Part I: The Look and Sound of Science Fiction Film
Jörn Piontek, “There was a world once, you punk”: Visual Subversion in Fleischer’s Soylent Green
Dennis Edelmann, “Like Alice in Wonderland”: Special Effects in The Matrix
Fabian Gumbrecht, “What are you doing, Dave?”: The Confrontation of Dave Bowman and HAL 9000 in Stanley Kubrick’s 2001: A Space Odyssey

Part II: Social and Political Commentaries
Niklas Franzen, “Jupiter and Beyond the Infinite” as Social Reflection? The Success of the Sequence Among Young Adults of the Counterculture
Manfred Alexander Müller, It Used to Be a Man’s World: Manhood and Masculinity in Don Siegel’s Invasion of the Body Snatchers
Philipp Stückrath, “What keeps us safe also keeps us free”: State Control vs. Personal Liberty in Steven Spielberg’s Minority Report and the Present-Day United States
Moritz Emmelmann, Religion in Soylent Green

Part IV: (De)Constructing Bodies and Identities
Benjamin Ryan Ulonska, Human Monsters: The Function of the Horror Motif in Don Siegel’s Invasion of the Body Snatchers and Its Remakes
Gina Ziebell, Why Does the One Only Exist in Cyberspace? Obsolescence of the Body, Construction of a Virtual Subject and the Question of Control in The Matrix 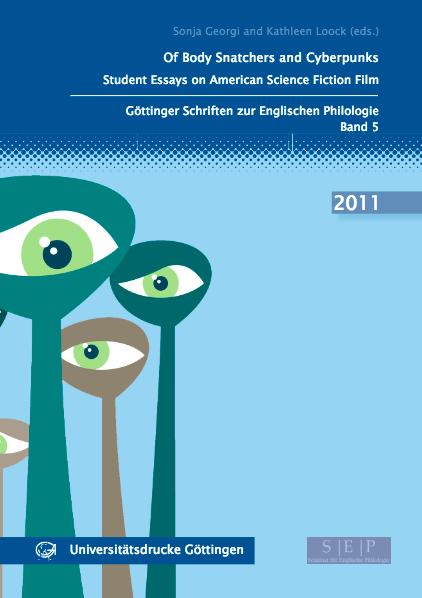