Salicylic acid (SA) accumulates upon attack with biotrophic pathogens, which activates a large set of defense genes both in locally infected and in systemic leaves finally leading to the broad immune response “systemic acquired resistance". Many, but not all SA-induced responses require the central regulatory protein NPR1. In the non-induced state, NPR1 proteins form intermolecular disulfide bridges leading to an oligomer that does not enter the nucleus. Upon SA accumulation, the levels of reduced glutathione rise leading to the reduction of critical cysteines and its nuclear translocation(Mou et al. 2003). In the nucleus, the protein forms an activating complex with TGA factors (Zhang et al., 1999).

SA negatively regulates the JA/ET pathway, presumably through glutaredoxin ROXY19, which is induced after SA treatment in a TGA-dependent manner (Ndamukong et al., 2007). We are currently challenging our working hypothesis, that ROXY19 interferes with the activating function of clade II TGA transcription factors either through direct regulation of critical cysteines of TGA factors or of TGA-interacting proteins. 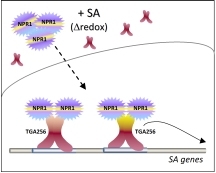 Schematic representation of the salicylic acid (SA)-induced signalling pathway. NPR1 enters the nucleus only after an SA-mediated change of the redox state of the cell.