Contact: Prof. Dr. Andrea Polle, Email: apolle(at)gwdg.de
Current climate projections for Lower Saxony predict increasing air temperatures and a rise in the frequency and duration of summer droughts. European beech (Fagus sylvatica L.) is the most important tree species of the potential natural vegetation in Lower Saxony. It is unknown whether beech trees under the growth conditions of Lower Saxony are negatively affected by climate.
The main goal of subproject P4 "Molecular and physiological adaptation and acclimation to drought" was to investigate how European beech responds to drought at the cellular level and how this translates into the performance of this important species under dry conditions. This subproject, thereby, contributes to the central aims of the KLIFF project (www.kliff-niedersachsen.de). In particular, we studied the responses of European beech to drought stress in three locations of Lower Saxony differing in annual precipitation (500-800 mm year-1), using both field and experimental approaches.
Our objectives were to answer the following questions:

It is known that changes in wood (e.g. the reduction of vessel diameter within the xylem) are very important for the adaption to drought stress. Only little is known about the molecular basis of this adaptation mechanism. We conducted field experiments with beech trees grown on two soil types (loam and sand) in three sites along precipitation gradient: Unterlüss 800 mm, Göhrde 630 mm, Calvörde 550 mm. Wood sampling was carried out during the project in April, June, August and October. The samples were analysed for the expression of genes involved in drought stress adaptation, e.g. regarding the stress hormone abscisic acid. Furthermore, in cooperation with the department for plant biochemistry at the University of Goettingen (AG Feussner), we determined phytohormones in the developing wood. The sites differed severely across the seasons. Using RNA sequencing and multivariate data analyses, groups of genes affecting wood formation under stress were identified. These genes might be further developed as a marker for forest genetic analysis.

We used beech saplings collected along a moisture gradient to investigate whether gene expression indicated preformed adaptation phenomena to drought. Sampling was conducted in cooperation with AG Leuschner and AG Finkeldey. The results showed that saplings from humid locations showed a strong response in their gene expression to drought stress, whereas saplings from dry sites showed only little reaction under the same conditions. This difference in gene regulation reinforces that genetic adaption already takes place (Carsjens et al. 2014). The selected genes are therefore important candidates for the beech's adaption to drought stress. It is advisable to involve those candidate genes in further forest genetic analysis as we could show a correlation between drought tolerance and gene expression. 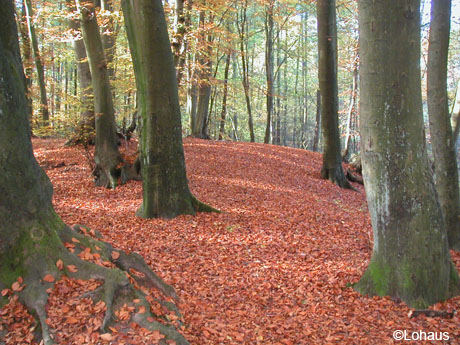 Ministry for Science and Culture of Lower Saxony (Germany) funded the program "Klimafolgenforschung in Niedersachsen" (KLIFF). Ngoc Quynh Nguyen was funded by a PhD scholarship awarded by the Ministry of Education and Training of Viet Nam. 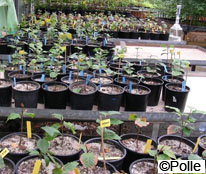