Most grass species are colonized by a diversity of microorganisms, forming an important, however discrete complex of interactions. Among these microorganisms the most interesting group are endophytic fungi (Ascomycota; Clavicipitaceae), which have established a symbiotic relationships with grass species. Systemic fungal endophytes (genus Neotyphodium) do not cause visible symptoms when colonizing the host plants and are vertically propagated via the seeds. However, these endophytes confer at least partial resistance to insect herbivores, plant pathogens or nematodes by producing specific mycotoxins. Although specific attributes of these interactions have been intensively studied we still lack a thorough understanding of the impact of grassland management regimes on plant-endophyte-herbivore interactions. Ecosystem processes mediated by these endophytes will be studied by varying plant diversity, nutrient and cutting regimes. Specifically, this sub-project aims at understanding the influence of endophytic fungal diversity and density on belowground and aboveground herbivore diversity.


Influence of grassland management intensity on the diversity of endophytes in Lolium perenne, Festuca rubra and Dactylis glomerata

The second phase of the project is an on-going study how the intensity of grassland management influences endophytic species in grasses. The main focus of the research is the diversity of endophytic fungi and bacteria in Lolium perenne, Festuca rubra and Dactylis glomerata dependent on the intensity of grassland management. Moreover, we will analyse if there are differences between the active and the inactive endophytic community in these grass species.
Another main point of research will be the conduction of an herbivory experiment for analysing the influence of endophytic species on herbivorous organisms. In addition, we will try to find out if there are changes in plant metabolism caused by endophytes, which are responsible for the resistance against herbivores. 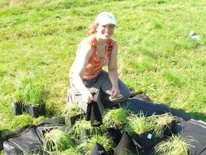