In-situ transmission electron microscopy studies of the deformation of single crystal metal nanowires. Recent studies have confirmed that "smaller is stronger" in metal samples down to sizes as small as several tens of nanometers. However, the reasons for this increase in strength remain highly controversial. Recent advances in nanowire fabrication, manipulation and handling of nano-size objects, and in-situ mechanical testing methods, are making direct observation of deformation at small length scales possible. This demanding project will involve the handling and transfer of nanowires in a focused ion beam microscope and the observation of these wires during tensile testing in a transmission electron microscope. The goal is to understand how deformation proceeds in small crystal volumes. 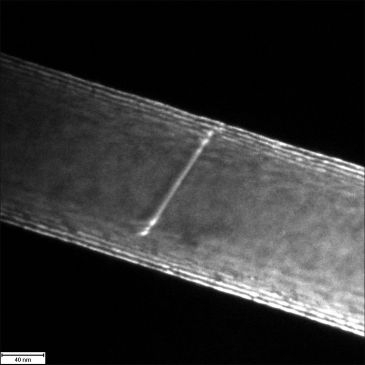 TEM weakbeam image of a dislocation in a deformed nanowire.


Au and Cu wires are being supplied by two collaborators:

Multilayer thin films with dimensions at the nanometer scale represent a new class of materials which exhibit improved mechanical properties owing as a result of size effects. The choice of metals and polymers as multilayer materials promises the systematic manipulation of composite mechanical properties such as elastic modulus and hardness. Mechanical characterization of multilayer thin films is done by performing uniaxial compression tests on columns machined with a focused ion beam microscope. The compression tests are performed using a nanoindenter with a flat diamond punch. The figures show a column with a diameter of 2?m before and after compression as well as the corresponding load-displacement data. In the future, a tensile testing machine will be developed to perform micro-tensile tests in the in-plane direction of freestanding multilayered films. 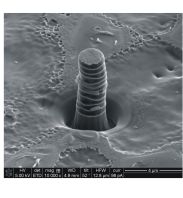 It has recently been established that decreasing the thickness of metal films leads to an increase in fatigue life and a change in fatigue damage morphology. This has been correlated with the high strength of thin films and attributed to their limited dislocation activity. The current research extends fatigue studies below 100 nm film thickness and to ultra high cycle numbers. Such studies are of great relevance for predicting the reliability of metal components used in micro- and nanotechnology, where they often experience repeated, low-level mechanical or thermal-mechanical loading. A resonant cantilever method has been developed using an AFM to test and monitor the fatigue behavior of Cu films with thicknesses between 20 nm and 2 nm. Strain amplitudes up to 0.1 % and cycle numbers up to 10^10 have been achieved. First results from a 200 nm thick film show evidence of narrow extrusions parallel and next to twin boundaries, as well as cracking and grooving at grain boundaries. This damage is similar to what is observed in low cycle fatigued films of similar thickness, giving first indications that the mechanisms of damage formation are determined predominately by the film thickness and not by the strain amplitude.