Like many other bacteria, B. subtilis is capable of forming multicellular communities, so-called biofilms. In these biofilms, bacteria are protected from harmful effects of the environment. In particular, pathogenic bacteria are more resistant against antibiotic treatment when present in biofilms. Each cell of B. subtilis can choose between two principal ways of life, i. e. between motility and sessility (biofilm formation), and these two lifestyles are mutually exclusive. We have discovered YmdB, a novel phosphodiesterase which is essential for the choice of the lifestyle: in the absence of YmdB, all cells are motile whereas the genes for biofilm formation are fully repressed (Fig. A). In the absence of YmdB, we observed the appearance of suppressor mutants that are able to form biofilms even without this important switch protein. To gain more insights into the biological function of YmdB, we have characterized such suppressor mutants and found that they are affected in the master regulator of biofilm formation, the transcription factor SinR. In wild type cells, SinR inhibits the expression of biofilm genes, and this repressor is hyperactive in ymdB mutants. In the suppressor mutants, SinR has either completely lost its activity, or the activity is compromised thus allowing expression of biofilm genes. Our results suggest that YmdB very directly controls the activity of the master regulator SinR, and they demonstrate that there is a selective pressure on the bacteria to produce biofilms, even in a laboratory environment. 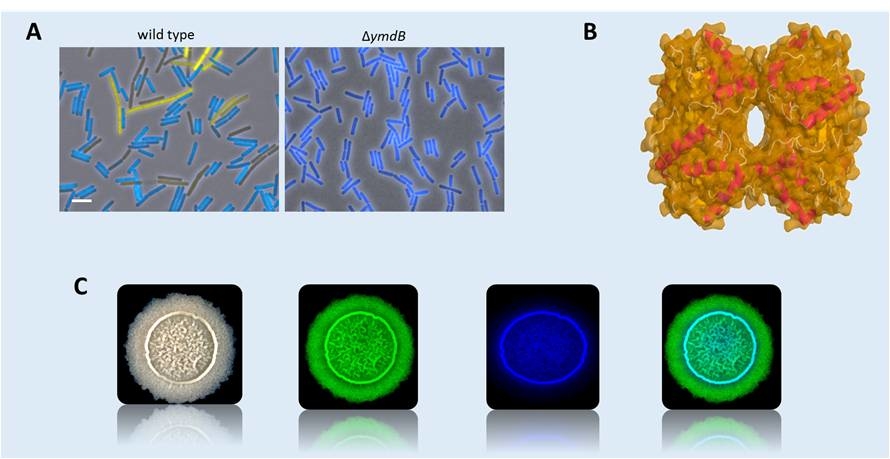