I am interested in soil animal communities and the factors (biotic and abiotic) by which they are structured with a focus on trophic interactions (food items, basal resources, energy fluxes and trophic plasticity).
In particular, I am interested in the importance of root- vs. litter-derived resources for soil animal nutrition. The rhizosphere (the narrow zone around a root) is a region of high microbial activity which provides food for microfauna such as protists and nematodes. By predation of microfauna or gracing on fungi these tree root-derived resources are propagated and distributed in the soil animal food web. Litter also called detritusphere, on the contrary can serve as habitat as well as food source which makes this habitat an interesting and difficult field of investigations.

Current project
In the framework of the Biodiversity Exploratories I am working on following sub-projects:

Community analysis along a time series
The Biodiversity Exploratories give us the opportunity to investigate annual shifts in soil animal communities as the same plots were sampled on a regular basis since 2008. Species fluctuate between years due to changing abiotic factors (temperature, precipitation) and biotic factors (changes in competition strength, predation or facilitation). We are investigating macrofauna including (Gastropoda, Annelida: Lumbricidae, Arachnida: Araneidae, Diplopoda, Chilopoda, Isopoda, Coleoptera, Diptera, Fig 1c, g ,h) and mesofauna (Oribatida, Gamasida, Collembola Fig 1b, d ,e, f, i) in respect to inter-annual fluctuations.

Resource manipulation-Trenching experiment
Feeding behavior of soil animals is difficult to observe as species hiding from direct observations and food resources being often invisible (microfauna and -flora). Experimental manipulation of resources allows to investigate the importance of resources and shed light into these complex soil animal food webs.
As evidence is increasing that root derived resources are important for soil animals, a root exclusion experiment was performed. By analyzing changes of the community structure (abundances and biomasses of different taxa) and food resources measured by NLFA (neutral lipid fatty acid analysis) and SI (stable isotope analysis) we are investigating the importance of root-derived resources and potential plasticity of soil animal communities.

Trophic structure of soil living Diptera larvae
By using emergence traps (Fig. 3) we capture Diptera direct after reaching maturity. Stable isotope signature of these individuals reflect the trophic position of larvae which are heavily understudied due to difficulty to identify Diptera larvae to species level.

My PhD project was part of the Research Training Group 1086, which investigated the effects of biodiversity on biogeochemical cycles and biotic interactions in temperate deciduous forests. I analyzed the contribution of litter- and root-derived resources to soil animal nutrition by using 13C (carbon) and 15N (nitrogen) labeling experiments. Therefore, two common tree species of the temperate zone, European beech (Fagus sylvatica) and common ash (Fraxinus excelsior), largely differing in traits such as litter quality and mycorrhizal association were chosen and analyzed in three experiments. The results of these experiments indicated that energy fluxes in the soil animal food web of beech and ash forests differ markedly. Beech trees produce leaf litter not easily to digest, but release root-derived resources into the rhizosphere which are then incorporated into the soil animal food web. In contrast, ash has easier digestible leaf litter, but the incorporation of root-derived resources are less pronounced as compared to beech. Fast decomposition of ash litter within the first year of litter decay might hamper the positive effect of easily ingestible leaf litter and leads to deprivation of food and habitat later in the year.

In my diploma thesis I investigated the effects of climate warming on performance (emergence time and weight loss) of wild bees, published in Fründ et al 2013, Oecologia. 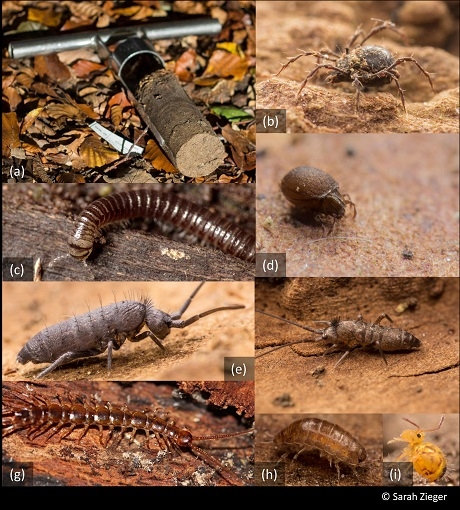 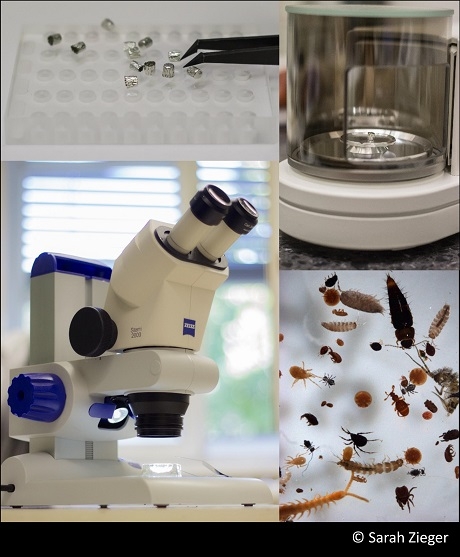 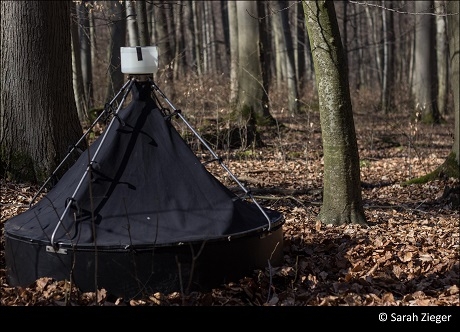