Deep subduction in Earth history: Seeking for traces in the sedimentary record

Modern-style plate tectonics are characterized by cold (<350°C/GPa) and deep (>100 km) subduction. Its onset marks a major change in the history of planet Earth, the timing of which, however, is highly controversial ranging from Mesoarchean (approx. 3 Ga) to Neoproterozoic (1.0 to 0.7 Ga). A key evidence for modern-style plate tectonics is the occurrence of ultrahigh-pressure (UHP) rocks reflecting deep subduction of crustal material down to depths >100 km. Searching for UHP rocks is biased by the notoriously incomplete geological record and hampered by laborious and spatially inefficient techniques to detect UHP rocks. We have recently developed and tested a new approach capable to trace UHP rocks at the catchment scale using UHP inclusions in detrital minerals such as garnet. This approach serves to test our central hypothesis that deep subduction processes leading to UHP conditions already operated prior to the Neoproterozoic. The project aims at (i) improving the new approach in order to develop a highly efficient technique to screen a region regarding the presence of UHP rocks, and (ii) investigating two Paleoproterozoic regions, the Trans-Hudson Orogen in North-East Canada and the Nagssugtoqidian Orogen in West Greenland, where UHP conditions are indicated but not yet proven by irrefutable evidence such as coesite and/or microdiamond inclusions. A successful project will (i) demonstrate that deep subduction processes already operated in the Paleoproterozoic, and (ii) allow for expanding regions and periods considered for UHP metamorphism in order to better constrain the timing of onset of modern-style plate tectonics on Earth. 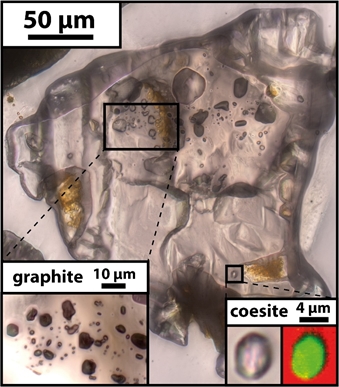