Biodiversity change in Central Europe since 1950 - the fauna

In close cooperation with the botanical partner project, we assess diversity and abundance of selected animal and plant taxa in different habitats of Germany and compare results with data available for the 1950s and 1960s. We aim at answering the following questions: Are there changes in biodiversity since 1950? Which species got extinct? Are there new ones? How did landscape configuration change? Are changes totalling to net losses or net gains? What about changes in functional diversity (e.g. guild composition)? Information on these questions for Central Europe is hardly available, particularly so for invertebrates.
Our initial approaches deal with studies by Schiemenz (1969) and Marchand (1953) on planthoppers and leafhoppers (Auchenorrhyncha), because the collected data are based on quantitative sampling schemes, and most of the study sites still exist today. A third approach will probably deal with changes in spider diversity and abundance. Repeating these older surveys will enable us to carry out comparative analyses, employing both univariate and multivariate tools. Additionally, aerial images and vegetation maps will also be used to relate patterns to changes in landscape structure.
The first project is based on the professorial dissertation of Schiemenz on planthoppers and leafhoppers in dry grasslands of Central Europe, which presents data on diversity and abundance of 185 Auchenorrhyncha species for 60 dry grassland sites; data on Orthoptera were also recorded. Thanks to the detailed notes of Schiemenz we could recover 8 sites each in Brandenburg, Saxony and Thuringia. Plant community composition was recorded, and conditions resembled those of the 1960s in about 80% of all cases. In summer 2008, we began sampling of plant and Auchenorrhyncha communities, Orthoptera will be surveyed in 2009.
The second approach deals with data from the 1950s, when Marchand studied the planthopper and leafhopper fauna in meadows and pastures on twelve sites near Stolzenau in Lower Saxony. This study represents a great opportunity for assessing diversity change, because not only data on fauna but also on plant communities and a vegetation map are available. Combining data on changes in flora, fauna and landscape structure will facilitate our understanding of trends and causal connections in long-term biodiversity development. First results will become available in winter 2009. 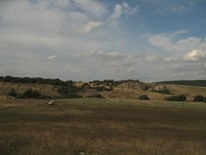