The mineral chemistry of detrital garnet is a strong tool in sedimentary provenance studies, yet there is no clear quantitative understanding of what garnet type originates from which host lithologies. In this project, we study this link since it has important implications for the identification of the potential lithologies exposed in the source area(s) and their evolution through time. The first part of this project involves a thorough literature study to collect mineral chemical data of garnet from various host lithologies. These data are used to test existing discrimination diagrams and to show some hints towards future perspectives in detrital garnet discrimination. The second part of this project involves fieldwork to collect a range of source rock lithologies as well as river sediments from adjacent fluvial systems from areas that are commonly seen as main source for detrital garnet. Mineral chemical analysis using electron microprobe and laser ablation ICP-MS will be performed on these garnet grains to test the applicability of garnet provenance analysis for source rock identification. The third part of the project involves a thorough multivariate statistical analysis of the comprehensive mineral chemical dataset derived from compilation of results from parts 1 and 2. The aim of the project is to establish new classification schemes that allow for better discrimination of the detrital garnet minerals and their potential host rock lithologies based on robust probabilistic models. 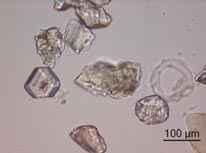 Photomicrograph of detrital garnet and other heavy minerals from a recent river sediment of the southern Tauern window (central Eastern Alps, Austria). Photo: A. Krippner