The subproject Hallig-D - Measuring, assessing and editing the turbidity- is attended by the department Sedimentologie/Umweltgeologie.

In the precursor project named Zukunft Hallig, new techniques to quantify the sediment deposition in order to calculate the vertical accretion of the hallig marshland of Hooge, Langeness and Nordstrandischmoor during storm surges have been developed and applied by Schindler et al. (2014a, b). Based on that data we can state a today's imbalance between the vertical accretion (range 1-3 mm/a) and MHW rise (5 mm/a) for the investigated Halligen.

Within the subproject Hallig-D the question is addressed, if there is an amount of suspended sediment during a storm surge that could be delivered onto the Hallig but is hindered by the coastal protection structures. In order to answer this crucial question we set up an autonomous turbitidy measurement system and will collect turbidity data simultanously and continously at six stations around the Hallig Langeness and at two stations on the Hallig during inundation events. This dataset together with meterological and hydrodynamic data will be used as input for a sediment transport model to be set up by the project partners at the University Siegen. The model will be used to investigate possible changes in the coastal protection concept in order to enhance sediment transport onto the Hallig. 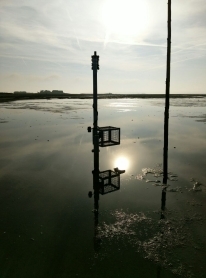