Cyclic di-AMP (c-di-AMP) is a signalling nucleotide that is produced by many Gram-positive bacteria, including the human pathogen Listeria monocytogenes. c-di-AMP is synthesized and degraded by specific diadenylate cyclases and phosphodiesterases, respectively (Fig. A). For L. monocytogenes and related bacteria it has been shown that c-di-AMP is essential for growth. Several targets have been identified in the past years that bind to c-di-AMP; many of these targets are involved in the transport of osmolytes. c-di-AMP is in fact essential to prevent uncontrolled influx of osmolytes into bacterial cells. Recently, we have determined the first structure of the highly conserved diadenylate cyclase CdaA from L. monocytogenes (Fig. B, C). We have also found that the CdaR protein negatively regulates the activity of the CdaA (Fig. D, E). Both proteins are located at the cell envelope, suggesting that c-di-AMP metabolism is controlled by an environmental signal. In this project we want to identify the signals that are received by CdaR and how c-di-AMP produced by CdaA affects the integrity of the bacterial cell. By applying genetic as well as biochemical approaches we aim to elucidate the interaction network of CdaA and its regulator CdaR. Moreover, we perform structural analyses to investigate the molecular details of the protein complexes. We also aim to identify substances that inhibit CdaA because the essential and conserved diadenylate cyclase is an excellent target for novel antibiotics. 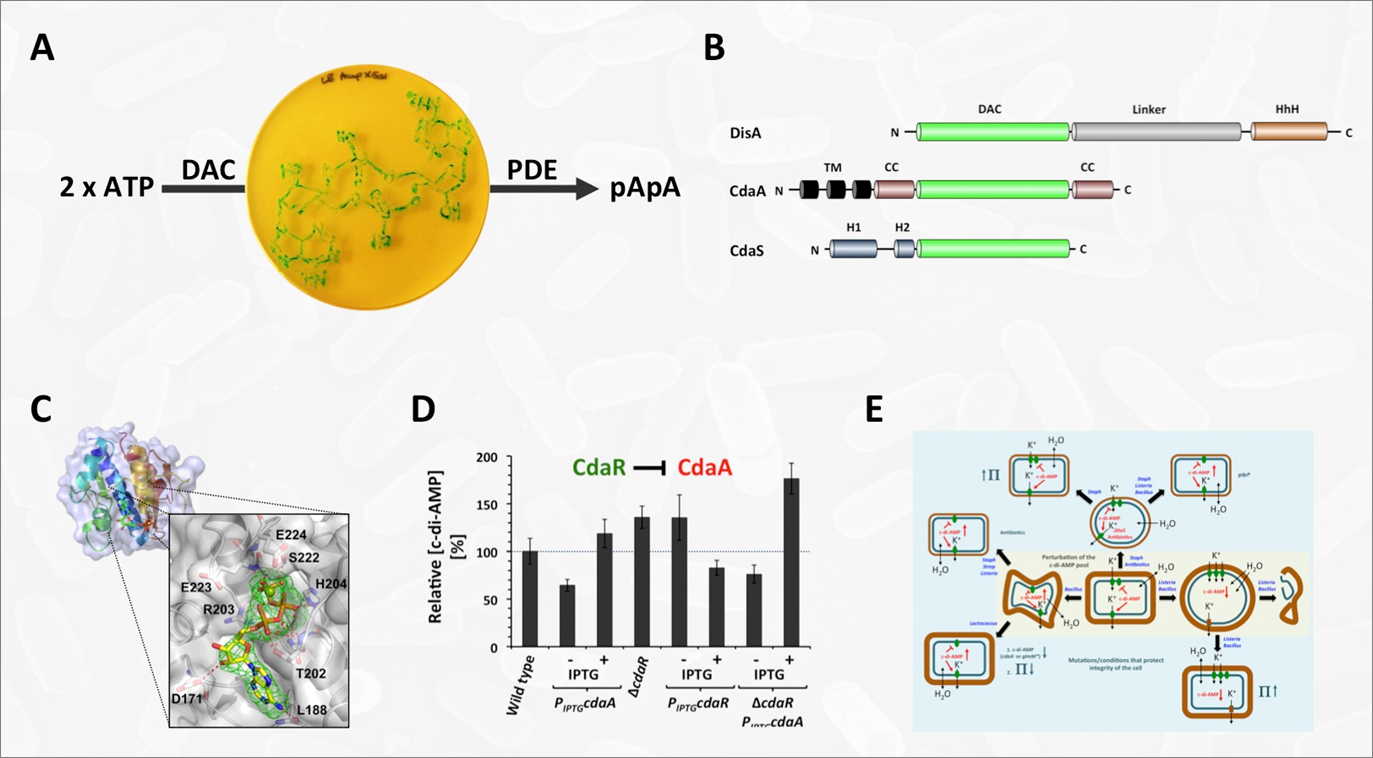 Figures. (A) Synthesis and degradation by diadenylate cyclases (DACs) and phosphodiesterases (PDEs), respectively. (B) Three types of DACs were identified in the past years (Commichau et al., 2015). CdaA is the most-abundant DAC. (C) Monomer of the L. monocytogenes DAC CdaA. (D) Control of CdaA by CdaR. (E) Phenotypes associated with perturbation of c-di-AMP metabolism.