This project is part of the project "Concentric Impact Structures in the Palaeozoic - the Siljan and Lockne craters" (CISP), which is an integrated part of the "Swedish Deep Drilling Program" (SDDP). The Siljan structure is the largest impact crater in Europe. It was formed by a bolide that impacted the terrestrial landscape of central Sweden in the late Devonian. The structure is concentric with a central rise composed of Proterozoic magmatic rocks or younger Proterozoic sediments and volcanic rocks (western side) across a 30 km wide area in the east-west direction. The obvious circular structure outside the central rise (Siljan Ring) is outlined by lakes and made up largely by marine Ordovician and Silurian sediments, extending the east-west crater diameter to about 52 km. Recently, new drill cores have been obtained from the Siljan Ring, which allow new insights into the subsurface structures and thus the early Palaeozoic history of the area. Sedimentary provenance studies will be carried out on outcrop and subsurface samples. Understanding the age and origin of the siliciclastic succession is important for reconstructions of palaeosource areas and sediment transport paths and may give novel approaches to test current palaeogeographic models, with important implications for our understanding of the Caledonian foreland basin history during the early Palaeozoic. 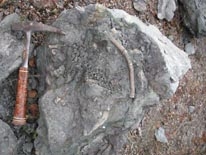