SubtiWiki: a database for the model organism Bacillus subtilis

Living cells are made up of individual parts, i. e. the genome, the proteins, the RNA and lipid molecules as well as the metabolites and ions. However, life depends on the functional interaction among these components which is often organized in networks. We have developed SubtiWiki, an integrated database for the model bacterium Bacillus subtilis. SubtiWiki is based on a relational database and provides access to published information about the genes and proteins of B. subtilis and about metabolic and regulatory pathways. We have included a network visualization tool that can be used to visualize regulatory as well as protein-protein interaction networks. The resulting interactive graphical presentations allow the user to detect novel associations and thus to develop novel hypotheses. To facilitate the mobile use of SubtiWiki, we provide enhanced versions of the SubtiWiki App. Importantly, the App allows to link private notes and pictures to the gene/protein pages that can be synchronized on multiple devices. SubtiWiki has become one of the most complete resources of knowledge on a living organism. 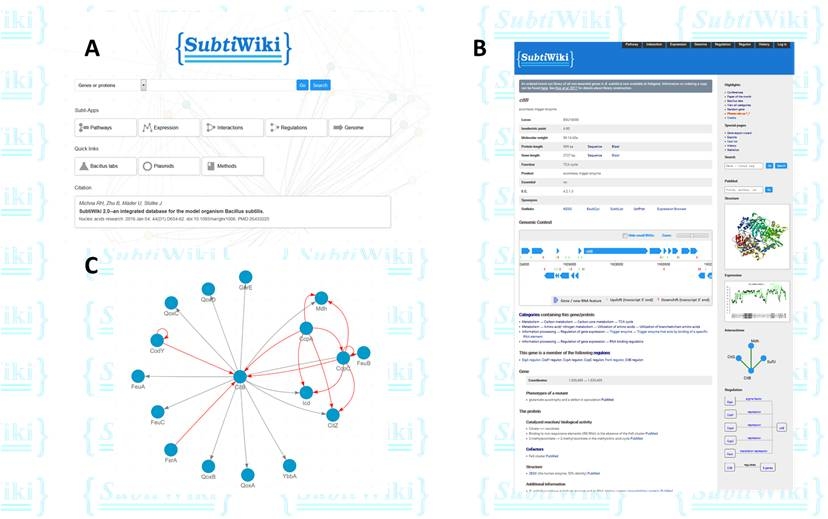 Figures. (A) The start page of SubtiWiki with a search box to find gene/protein pages. (B) The gene page for the citB gene encoding aconitase. In addition to basic information, the page provides an overview on the structure, genomic localization, expression, and protein-protein interactions (C) The regulatory network involving the citB gene and the aconitase protein.