In this studies we focus on the chemistry of volatiles during wood degradation progress in general. To draw our attention to meaningful components we selected the large timberworm Elateroides (syn. Hylecoetus) dermestoides (Col., Lymexylidae) to link chemistry to ecology of deadwood colonising in beetles. Because it causes damages in wood piles of almost all european hard- and softwood species it is well studied. A while after felling, trunks are infested and studies elswhere showed attraction to fermentation processes. This suggests cell wall degradation to be involved.

With a GC-MS/EAD setup we figure out wich of those odours the beetle perceives. The majority of the decay related odours could be found in all examined tree species as is beech (Fagus), oak (Quercus), spruce (Picea) and larch (Larix). The remaining minority is tree specific and enables the beetle to descriminate the trees at least at low distance. Now we carry out trap experiments to enlighten behavioural aspects of the semiochemicals.

b) How do fungal symbionts and mutualists contribute to the chemistry of wood decay?

The majority of woodboring beetles is associated to fungi. E. dermestoides larvae are true “gardeners” of the symbiotic fungus Ascoidea hylecoeti. Further Ophiostomatoid species have been found in galleries and we analysed volatiles released by 5 species on different substrates. With the GC-MS/EAD setup we attribute decay specific compounds to certain fungi and showed a kind of partner feedback used by E. dermestoides to recognise its symbiont A. hylecoeti. 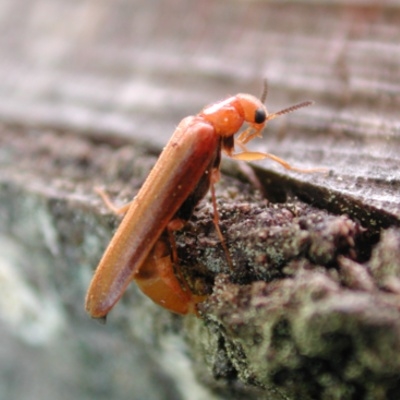