The origins and development of monotheism in ancient Israel has been one of the most significant debates within the study of the Old Testament of the last thirty years. It has generated numerous books and articles and resulted in a significant shift in the scholarly consensus and added considerably to our understanding of ancient Israelite religious life and thought. Unfortunately, the discussion is frequently concluded prematurely with the exilic ‘breakthrough’ to monotheism by Deutero-Isaiah.

A significant part of the problem is that a particular account of the nature of monotheism is held by interpreters. In this account monotheism is a stage of religion, which once reached is perceived to be self-evident to its adherents. Consequently regression into polytheism has been viewed as inconceivable. Additionally, monotheism was held to entail certain consequences, including universalism, anti-superstition and magic, ethical, aniconic. Thus, when scholars determined that Deutero-Isaiah was a monotheist, who was thought to exhibit these beliefs, it was held that true monotheism had been reached. The complicated and sophisticated history of religious change in ancient Israel had reached its goal.

It is clear though that, however different early Jewish beliefs are from those of their ancestors, there existed considerable diversity in the way that Jewish belief in God and the world was conceived and articulated. In his introduction to monotheism, published in 1996, Fritz Stolz identified at least four broad categories of monotheistic thought: priestly, deuteronomistic, wisdom and apocalyptic. Representatives of these traditions show a strong commitment to the one God of Israel, YHWH, but what that means in terms of their theology and their practice can be quite different. This diversity within Jewish monotheism becomes even more apparent in the late second temple period, when we have an abundance of information about the theology and practice of the diverse groups that make up Judaism.

The Sofja-Kovalevskaja Research Group under the leadership of Dr Nathan MacDonald seeks to examine the considerable diversity in Israelite and Jewish monotheistic thought and practice during the exilic and Persian periods, particularly through an examination of the relevant biblical texts. The project consists of a small team of post-doctoral and doctoral researchers based at the Georg-August Universität Göttingen. Each of these researchers is working with a biblical book or corpus of books and seeking to re-examine them afresh for what might be learnt about the diversity of Jewish monotheism. In addition, four colloquia will take place which will see a number of advanced scholars coming to Göttingen to examine the following themes:

The project has a strong contemporary resonance because of concerns expressed about the relationship between monotheism, hegemony and violence. An academic project that examines uniformity and diversity within early Jewish monotheism is important not only for the light it can shed on the history, literature and theology of the biblical texts and the second temple period, but also because it touches on issues of contemporary interest. It is a working hypothesis of the group that some of the equations of monotheism and violence are too simplistic and fail to take account of the diversity present in historical and contemporary forms of monotheism.

The Sofja-Kovalevskaja Research Group works in close collaboration with the other related research projects in the Theologische Fakultät, especially the DFG-funded Graduiertenkolleg, “Götterbilder – Gottesbilder – Weltbilder”, and with the two established Old Testament professors, Prof. Hermann Spieckermann and Prof. Reinhard Kratz. The research project runs from 2009-14 and is funded through an award of €1.65 million made by the Alexander von Humboldt Foundation to Dr Nathan MacDonald with the funding provided by the German Federal Ministry of Education and Research. 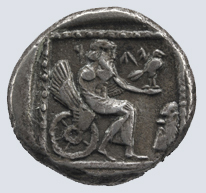 A Yehud coin depicting a local deity. more...
By permission of the British Museum.

The Sofja-Kovaleskaja Research Team, “Early Jewish Monotheisms”, conducts research on the unity and diversity of monotheisms in the biblical texts from the exilic and Persian periods.