I. Protein-RNA and Protein-Protein Complexes

One research focus of our lab concerns structural studies of the spliceosome, a huge macromolecular ribonucleoprotein particle catalyzing the removal of non-coding from pre-mRNAs. Several structures of proteins, protein-RNA, and protein-protein complexes of the U5 and U4/U6 snRNPS have been determined by us. 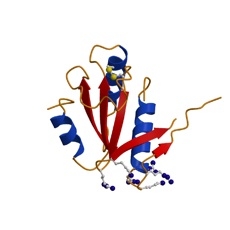 Fig.1 The crystal structure of the U5-15K protein revealed a thioredoxin-like fold (Reuter et al., 1999a, 1999b) containing a C-terminal extension and a distorted central â-sheet. These unique features are important for the interaction with another spliceosomal protein as recently observered in the crystal structure of the complex formed by U5-15K and U5-52K proteins (Nielsen et al., 2007). 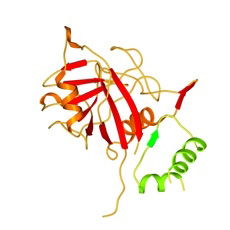 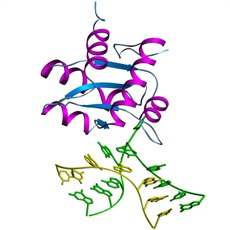 Fig.3 Most surprising was the structure analysis of the complex between the U4/U6 snRNP-15.5K protein and a cognate internal loop of the U4 snRNA (Vidovic et al., 2000). The 15.5K protein represents a novel RNA binding motif, that specifically interacts with RNAs containing asymmetric (mostly 5+2) internal loops (Nottrott et al., 1999). Structurally similar protein-RNA complexes were found for the ribosomal L30 protein bound to its pre-mRNA and the L7ae protein bound to rRNA as observed in the structure of the large ribosomal subunit. The 15.5K protein is also present the rRNA-modifying box C/D snoRNPs binding the snoRNA box C/D motif, which most likely forms an asymmetric (5+2) internal loop structure identical to the one of U4 snRNA. 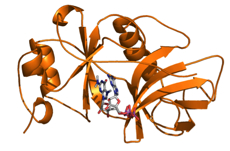 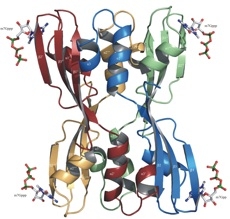 Fig.5 Four molecules of PARN are shown in different colours. The crystallized complex is formed as a dimer of dimers.

Many RNA molecules are posttranscriptionally modified. About 95 different chemically modified nucleosides have been identified in RNA. The crystal structures of RNA-modifying enzymes and their complexes with bound RNA help to understand the recognition of the RNA substrate and the mechanism of the catalyzed reaction.
The hypermodified nucleoside queuosine (Q) occurs in the first position of the anticodon of eubacterial and eucaryotic tRNAs endowed with the anticodon sequence GUN (tRNAsAsp, Asn, His, Tyr). Only eubacteria synthesize Q de novo, while eucaryotes obtain the corresponding base from nutrients or from the intestinal flora. The biosynthesis of Q commences with GTP, which is converted to preQ1 (7-aminomethyl-7-deazaguanine) by mechanisms and enzymes so far unknown. This precursor of Q is inserted into the first position of the anticodon of the tRNAs (position 34) by exchange with the genetically encoded guanine. The reaction is catalyzed by the enzyme tRNA-guanine transglycosylase (Tgt). Further biosynthesis occurs at the tRNA level, where a substituted cyclopentyl group derived by the ribose moiety of S-adenosylmethionine is attached to the nitrogen atom of the aminomethyl group of preQ1. This reaction is catalyzed by the S-adenosylmethionine-tRNA ribosyl transferase/isomerase (QueA). The resulting epoxy-queuosine (oQ) is finally converted to Q in a vitamin B12 dependent step by an enzyme that is not yet known.
We have determined the crystal structures of two enzymes involved in Q biosynthesis, namely of the tRNA-Guanine-Transglycosylase and of the S-adenosylmethionine:tRNA ribosyl-transferase- isomerase. 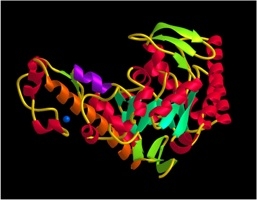