Sulphur SAD phasing of the 66.3 kDa protein - from structure to function?

The lysosomal 66.3 kDa protein from mouse is a soluble, mannose 6-phosphate containing protein of so far unknown function. It is synthesized as a glycosylated 75 kDa precursor that undergoes limited proteolysis leading to a 28 kDa N- and a 40 kDa C-terminal fragment.
In order to gain insight into the function of the glycosylated 66.3 kDa protein, its structure was solved by sulphur SAD phasing in the monoclinic space group C2 with one molecule in the asymmetric unit 1. The refined 22-atom substructure comprises twenty-one intrinsic sulphur atoms and one xenon atom (Fig. 1). 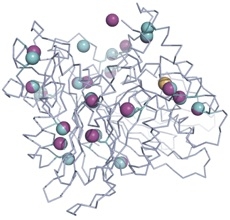 Fig. 1. Initial structure of 66.3 kDa proteins solved by sulphur SAD phasing. A xenon atom indicated as a yellow sphere. For orientation, the C¦Á trace of the refined 66.3-kDa protein structure is shown with cysteine and methionine side chains in stick mode and sulphur atoms highlighted as spheres in blue and purple (initial positioning versus refindes position).


The contribution of the single xenon atom to the anomalous signal was analyzed in comparison to that of the sulphur atoms. The structure of the 66.3 kDa protein belongs to one of the largest solved by sulphur SAD phasing so far and to a limited number of successful structure determinations by this method in a low symmetry space group.
Three additional crystal structures were determined, that represent different maturation states of the protein and thus shed light on the post-translational processing 2. These structures demonstrate that the 28 kDa and 40 kDa fragment that have been derived by a proteolytic cleavage remain associated (Figs. 2, 3). 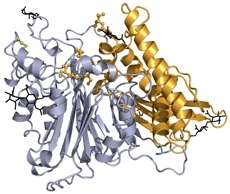 Fig. 2. Cartoon model of the 66.3 kDa protein (3FGR) viewed along the ¦Â sheets (at the top). The 28 kDa and 40 kDa fragment are coloured in orange and grey, respectively. The last four C-terminal residues of the 28 kDa fragment (G245-S248) as well as the two intermolecular disulfide bonds are highlighted in ball and stick mode and coloured in orange and yellow, respectively. The five glycans and the asparagine residues, at which they are attached, are shown as thick black lines. 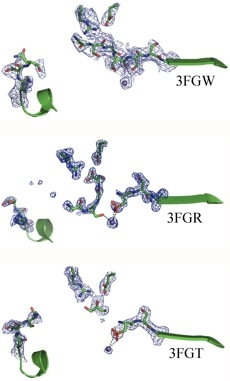 Fig. 3. Comparison of the region of the 66.3 kDa protein, which differs significantly between the one chain and two chain variants. The determined structures are arranged in the putative order of the maturation process starting (top to bottom). The most significant differences concern the residue range N239-C249. This range and additionally the adjacent residues K237, T238 and S250 as well as the side chains of E507 and R531 and a glycerol molecule are shown in stick mode (carbon, oxygen and nitrogen atoms in green, red and blue, respectively) with the surrounding electron density of a FoFc simulated annealing omit map at a contour level of 5.0 ¦Ò. The bound Na+ ion and the coordinating bonds are shown as a purple sphere and black dashed lines, respectively. For orientation, the adjacent residues L231-N236 and A251¨CK254 are shown in cartoon mode. 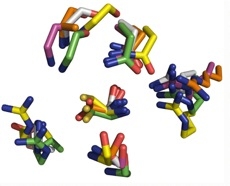 Fig. 4. Superposition of the conserved active site residues of the 66.3 kDa protein and the four most related N-terminal nucleophile hydrolases reveals a high positional similarity. The residues are coloured by atom. Nitrogen, oxygen and sulphur atoms are shown in blue, red and light orange, respectively, for all structures, whereas the carbon atoms are represented distinctly for the various structures as follows: 66.3 kDa protein in grey, cephalosporin acylase (1OQZ) in pink, penicillin V acylase (3PVA) in yellow, conjugated bile acid hydrolase (2BJF) in green, penicillin G acylase (1K5S) in orange.

FGE Formylglycyl-Generating Enzyme and its

Multiple sulfatase deficiency (MSD), a fatal autosomal recessive syndrome, is caused by the inactivity of the formylglycine generating enzyme, FGE. This inactivity prevents the formation of formylglycine - the key catalytic residue in the active site of enzymes essential for degradation and remodeling of sulfate esters, so called sulfatases. Formlyglycine is unique to sulfatases and in higher eukaryotes it is generated from a cysteine precursor.
pFGE is a paralogue of FGE of so far unknown function.
The crystal structure of human pFGE and FGE display a novel fold (Fig.1.). The structure explains the severe effect of all eighteen missense mutations found in MSD patients, clearly rationalizing the molecular basis of MSD. 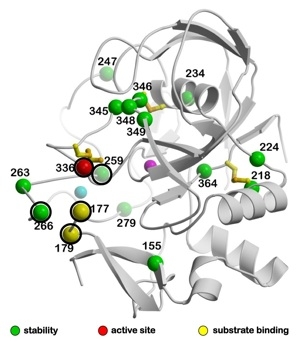 Fig. 1. Overall structure of FGE an missense mutations in FGe tahlead to MSD. The mutations known in patients are grouped according to the legend on the bottom of the page.

The catalytic mechanism of formylglycine generation was deduced from different structures of FGE obtained in different redox environments. A redox-active disulfide bond located at the bottom of a cleft and the adjacent loop regions reveal the active site (Fig.2.). The structures allow to deduce a novel oxigenase mechanism utilizing molecular oxygen to generate formylglycine via a cysteine sulfenic acid intermediate. 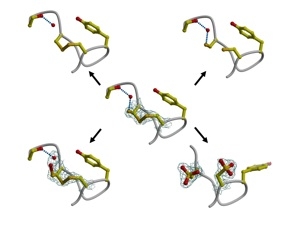 The arrangement of the molecules in the crystal structure as a dimer suggests, that the functional active from is a dimer as well. It is tempting to speculate that the dimerformation could be a way of regulation of activity, with the hetero-dimerization of FGE and pFGE resulting in an inactive form. 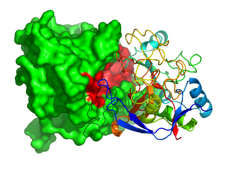 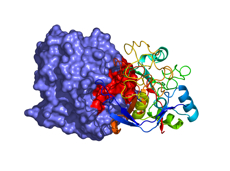 Fig. 3.Left. Dimerformation of pFGE as observed in the crystal structure. The molecule to the right is depicted in cartoon mode (rainbow coloring from N to C-terminus) while the second molecule is shown in surface representation (green) with the region corresponding to the active site of FGE depicted in red. Right. Superposition of FGE to the pFGEdimer. The pFGE in surface representation is replaced by FGE (purple) with the active site in red.