GRAS proteins, which are unique to plants, are typically composed of 400–770 amino acid residues and exhibit considerable sequence homology to each other in their respective C-termini, the GRAS domain (Bolle, 2004). Arabidopsis has 33 members which play important roles in diverse functions ranging from gibberellic acid signaling to root pattern formation and light responses.

We have shown that SCL14 is permanently recruited to target promoters through its interaction with as-1-bound TGA factors and that this recruitment is essential for the transcriptional activation of detoxification genes. SCL14 is found both in the nucleus and the cytosol. Blocking the nuclear export leads to its accumulation in the nucleus indicating a constant shuttling between both compartments (Fode et al., 2008)


SCL14-related projects in my lab: 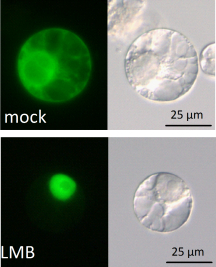 Subcellular localization of SCL14 fused to GFP. The protein was transiently expressed in plant protoplasts. After treatment with the nuclear export inhibitor LMB, the protein accumulates in the nucleus.